Personal note: this one is up so late because I had to leave town for the funeral of my Niece’s 28-year-old husband. He passed of liver failure. I only note this because I most likely won’t be posting something on Wednesday.

Officials in Austria have gone public with fears that the terror group ISIS may be finding a new wave of recruits among its teenaged girls after a number of girls have run away from home intending to join ISIS forces in Iraq or Syria. Unfortunately, Austria isn’t alone teens are fleeing countries all across the west to join jihadis.

Earlier this year, two teenaged Austrian girls ran off to Syria and soon began posting photos of themselves on their social media accounts toting AK47s, wearing burkas and sporting ISIS regalia. Others have since attempted to run away and join these girls sparking fears among officials that the girls are fostering a sickening trend of wannabe terrorist runaways.

Thanks to their social media updates, Samra Kesinovic, 16 and her friend Sabina Selimovic, 15, have become minor celebrities among many teens in Austria’s Muslim minority community after the two ran away from their homes in Austria and ended up hanging around ISIS in Syria.

This month authorities announced that they apprehended two more teen girls who were trying to find passage through Turkey and into Syria to join the ISIS jihad movement.

Austrian officials also reported that they stopped a German citizen who was traveling through Austria in an attempt to join up with ISiS in Syria.

“If we can catch them before they leave we have the chance to work with their parents and other institutions to bring the youngsters out of the sphere of influence that prompted them to act in this way the first place,” Marakovits said. 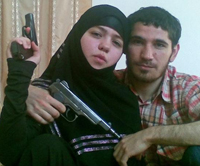 The problem in Austria isn’t an isolated one. An American teen was recently arrested on charges of conspiracy to provide material support to a terrorist group when she tried to leave the country for Syria.

19-year-old Shannon Conley from suburban Denver appeared in court on September 10 where she faces up to five years in federal prison and a possible $250,000 fine for trying to leave the US to join ISIS.

Conley converted to Islam and was convinced by a Tunisian member of ISIS whom she met online to try and board a flight to Syria.

The young woman told authorities she intended to help ISIS with her skills as a nurse’s aide.

Melanie Smith from King’s College International Centre for the Study of Radicalization reported that up to 21 British girls have run off to join ISIS forces.

Stories like this are occurring all over the world as the terror group grows in power and stature among Muslims.

Just an update to note that one of these Austrian teens has already been killed while fighting for ISIS. As of press time, authorities aren’t sure which one is dead but either Samra or Sabina has been killed.