City authorities in Highland Park, New Jersey have stopped using tax dollars to fix sidewalks and are attempting to force residents to pay their own money to replace the deteriorating concrete slabs in front of their homes–slabs put in by the city years ago and originally paid for with tax money. Worse, now the city is taking residents to court who have refused to pay their own cash to fix these sidewalks.

Two years ago the city of Highland Park passed an ordinance to save tax dollars by requiring residents to pay their own money to fix the sidewalks.

After the ordinance was passed, city inspectors ranged out across the city to inspect the sidewalks painting a white X on the ones the city intended to force home and business owners to replace with their own money. Then, after a few months time, the city began to send out letters to residents demanding that the sidewalks be fixed at a cost of some $300 per slab.

The city claims it is a matter of “safety.” Residents say it is just a shake down.

Now, two years later, many homeowners have refused to pay this new tax and have not fixed the sidewalk slabs tagged by the city. So, the city is now taking dozens of homeowners to municipal court to force them to abide by the fiat “law.”

The city attorney has sent letters to 81 residents who have refused to pay this new stealth tax telling them that they are being sued by the city. Officials claim that a fine of $139 for a first “offense” will be levied on top of the cost to replace the concrete slabs in question.

Some of the homeowners say that the sidewalks have been ruined by tree roots from trees that are on city property and they don’t feel they should have to pay to replace sidewalks ruined by roots coming from city-owned trees.

But whatever the cause of the deterioration, how is it proper that a city can use tax dollars to make these walkways but then years later simply decree that the sidewalk repairs are now the duty of individual homeowners to make?

And if this policy stands, where does it end? Can a city say that residents have to pay for sewers, police, other services? And if so, then what are taxes for in the first place? Just a means to pay city workers… workers who do… what, exactly? If city residents are supposed to pay for everything as individuals instead of collective taxpayers, why do we need city workers? Why not just have private services for everything and eliminate the government and the taxes?

So, why pay taxes at all if none of that money is going to actually serve the people?

Still, if this is the sort of corrupt program that we can expect of our governments, then tax protests should become the norm, shouldn’t they? What form that protest might take is hard to say, but how can citizens fight back against this stuff? 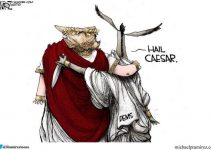