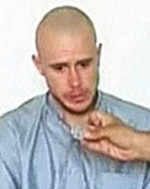 There are an awful lot of unanswered questions and controversies in this POW release of US soldier Sgt. Bowe Bergdahl. Firstly, it seems he actually deserted the army, he didn’t just get accidentally captured. Secondly, it seems his father might be in sympathy with our Muslim enemies. Last, Obama’s action in negotiating with the terrorists for his release may have violated the law because he did it all secretly without telling Congress.

There is a story from a member of Bowe’s own unit that details his weirdo behavior, wacky ideas, and ultimate desertion. According to one of the soldiers who served with Bergdahl, he didn’t get captured after wandering off. He was in the process of deserting the Army when he got captured.

In this soldier’s telling, Bergdahl was making all sorts of strange claims–he said he once beat up drug dealers back home and that he once joined the French Foreign Legion and he did neither–and kept telling his troop mates that he was going to become a mercenary so he could shoot people.

In one part of this soldier’s story, Bergdahl sent all his belongings home just before he disappeared into Taliban country. Why would he do that unless he intended to leave?

Then the idiot ended up captured by the Taliban after he deserted to go become a “mercenary,” whatever he thought that was?

In this telling of Bergdahl’s actions, he seems unbalanced to begin with.

Then there is the strange Tweet that Bergdahl’s father sent out then quickly tried to delete.

It appears that Bergdahl favorably re-tweeted the claim of a Taliban terrorists that America is guilty of being the child-killing terrorists. 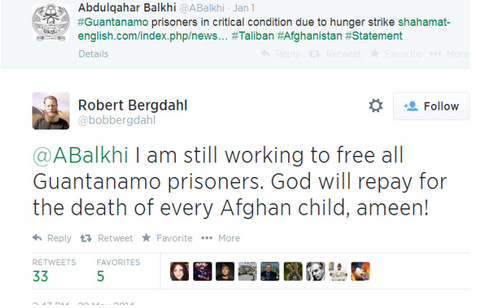 Is Robert Bergdahl in sympathy with the Taliban? This Tweet raises suspicions that he is.

Finally there is Obama’s violation of the law with his actions of negotiating with terrorists in secret without informing Congress he was doing so.

Congressman Howard “Buck” McKeon of California and Sen. James Inhofe of Oklahoma said Saturday in a statement that Obama is required by law to notify Congress 30 days before any transfer of terrorists from the U.S. detention facility.

Just the GOP looking for another way to slap Obama? In any case there will now be hearings on the matter.

Anyway, there are an awful lot of strange things going on, here. But it is doubtful we’ll ever know the full facts in all this.

All I can say is, Obama did break the rule that the USA does not negotiate with terrorists and that right there isn’t a good thing.

It is looking worse for Robert Bergdahl, the father of the now returned soldier. Above we see that he retweeted a terrorist’s anti-American Tweet and seemed to endorse the idea. Now we can see that he may really be as much of an anti-American creep as some think. Here is another Tweet he made that has come to light: 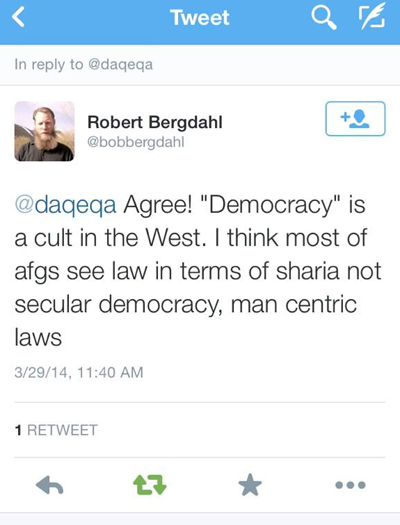 Um, wha? So, he is an anti-capitalist, too? On top of that he speaks highly of sharia law??

Maybe the reason he has that wild, unwieldy beard is because his is himself a Muslim? At least that would explain all his crazy, anti-west, anti-American Tweets, wouldn’t it?

Otherwise, what is he? What the heck is going on with this guy?