It’s all the rage, all of a sudden, for national restaurant chains to start posting little, powerless stickers on their doors in the attempt to tell law-abiding, legal gun owners that their business is not welcome there. But it is also a new rage for criminals to repeatedly rob those same stores because they now know that no one inside will be armed. Imagine that.

Lately several restaurants have made news by claiming to have banned guns inside their stories. Buffalo Wild Wings, Chipotle, Sonic, Chilli’s and Starbucks are all claiming they have banned legal gun owners form doing business with them.

Take the Sonic fast food chain, for instance. This month the Sonic corporate heads got their tiny little minds together and announced that all Sonic customers will henceforth be unarmed. Consequently, the very day the company made this grand announcement, one of its locations was robbed.

The attack happened in Topeka, Kansas, only a few hours after Sonic made its cute little announcement that firearms were banned within and around their restaurants.

This isn’t the only story. The Jack In The Box restaurant chain also announced a gun ban in its stores. As a result, three separate Jack outlets, one in Tennessee and two different locations in Houston, Texas, were robbed as soon as the company banned guns.

These aren’t the only incidents. A BBQ place in Durham, North Carolina joined other local establishments in telling gun owners they weren’t welcome and… guess what. You got it, they got robbed as soon as they put up the no gun signs.

I noted a week ago that holders of concealed carry licenses should simply ignore these little anti-gun signs. They have no force of law and if your gun is concealed there is no reason to go around telling restaurant managers you’re armed. That is, after all, why we call it a concealed carry permit!

Of course, one should follow whatever state laws are extant. If the state law prohibits carrying a firearm at a school or courthouse or what have you, then follow the law. But these restaurants have no right to tell you not to carry in their shops.

If the Constitution prevents stores from saying they won’t serve a gay person, then there is no reason they should be allowed to refuse a legal gun owner, either.

I suspect that this no-gun rule will eventually be taken to the courts.

After all, if I am in a store that is getting robbed and the store insisted that customers go unarmed, can’t I sue the store for putting me in danger? And can a mere store summarily remove my Constitutional, Second Amendment rights because they are operated by liberal weenies? And… well, there are a lot of questions that need to be answered, here, aren’t there?

Certainly gun owners can simply refuse to give their money to companies like Chipotle. But, why should they? Why should they self-segregate and allow liberals to tell them where they are “allowed” to eat lunch and where they aren’t? Don’t the same liberals say that Christian bakeries should be forced to bake cakes for gay weddings because gays should be allowed to shop anywhere they want without discrimination? Why should gun owners be different?

On an ending note, I was on Granite Grok radio this weekend talking about this very issue and one of the hosts said something that I thought hilarious.

He said that gun owners should call up one of these restaurants and order a big order of food for pickup. Then, upon getting to the restaurant, stop outside the door, call for the manager and say something such as, “Gee I didn’t know this was an anti-gun establishment. I’m afraid I’ll have to cancel my order as I can’t come inside to pick it up. Bye now.”

Of course I am not advocating that gun owners do this (wink, wink), but I wonder how much thrown away food they’ll put up with before they change their policy! 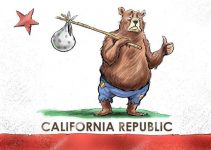