Well, even after claiming that he was sticking around til the bitter end… it looks like the end came quicker than Veterans Administration Chief Eric Shinseki thought. Today Shinseki finally resigned after several sitting Democrat Senators and Representatives joined Republicans and called for his head.

Of course, Shinseki’s resignation won’t really fix anything, but Democrats and their handmaidens in the left-wing media will claim that Obama took a “bold step” and now everything is juuuuuuust fine. Nothing to see here. Move along.

Sloan Gibson will take over as interim VA Secretary.

But here is an interesting thought: Could Mitt Romney be the best turn around guy?

This idea comes from someone I really dislike, but it still isn’t the worst idea in the world.

“I do have to say – I’m sorry, I just have to say Shinseki’s been there for six years. I don’t care what I’m running. If I’m running a place for six years and the backlog is that long and it catches up on you and seems to surprise you. And then what happens in Phoenix may be happening elsewhere, I’m sorry. Whoever’s in charge, whoever’s running the post, that person is gone. And we need to find somebody else to do it. I would love to see somebody like a Colin Powell step up. I think somebody suggested it on Twitter. I think it’s a great idea. A guy like Mitt Romney. Make it apolitical. Have Romney go in for the fight of his life, save the VA. Get somebody like that outside that knows how to run things. I guarantee you get a guy like Colin Powell or Romney in there or find a Democratic business leader and about three or four days in they’re going to go, ‘You do what? Wait. What do you do?’”

I have to say, that isn’t a terrible idea…. despite that I’d rather Mitt Romney just go away… forever. But if he can fix the VA, it wouldn’t be a bad thing, would it?

And it’s open thread day, so have your say below on any topic at all… except how stupid I am. Save that for the other threads. Let’s do something different today. LOL 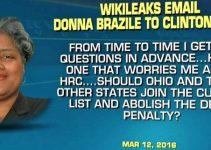