1) (David Robertson) – “Raise your hand if you have been a lousy President.”

3) (guido81_MA) – “Try as he might on Good Friday, the false messiah still could not make the stigmata appear.”

4) (Stephen_Macklin) – “All those in favor of doing nothing…”

The Readers Choice Award went to David Robertson’s winning entry. In its place we offer one more excellent, if overlooked, entry:

(Retired military) – “Just like his administration Obama doesnt know what his right hand is doing.” 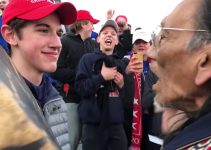