For the last several years there’s been a debate raging about whether ObamaCare is killing jobs. Republicans, who are more likely to have actual experience in the real world, have been predicting since ODay One of ObamaCare that it would be a job killer.

Democrats, who tend to try to create their own reality – “We have to pass the bill to find out what’s in it” – insist that ObamaCare will lower overall medical care cost and will be a net job creator.

Needless to say, the Obama servicing New York Times got involved in the tiff. Back on October 5th of last year – when the ObamaCare website was still totally dead – here’s the wisdom they brought bear.

FOR YEARS, Republicans have labeled President Obama’s Affordable Care Act a “job killer.” But as the essential elements of the law begin to phase in, conservative critics have become more specific, latching onto alarming stories about certain businesses cutting employees’ hours or declining to hire workers — all, apparently, because of the health-care law’s dictates.

As usual with Obamacare, it’s not that there isn’t something to be concerned about. But Republicans have blown the law’s potential problems so far out of proportion that their attacks sound like a “Saturday Night Live” parody.

There are other concerns. Some observers argue that uncertainty about how much health-care premiums will rise under the law could discourage hiring, at least until the cost picture is clearer to businesses. But there will be countervailing effects. People won’t be as locked into their jobs, since they won’t have to stick with certain employers to ensure they have health-care coverage. That will make it easier for people to move into jobs they’re better at, and it could promote entrepreneurship. With more reliable care, workers might better manage the symptoms of one-time or chronic illnesses, which could cut down on the number of sick days they take. And the health-care industry probably will hire more people.

The net effect is hard to predict exactly. But it won’t add up to anything close to Mr. Cruz’s employment apocalypse.

So, the New York Times says that, while the future is somewhat uncertain, it’s likely to be bright. Fewer sick days, portability of insurance, etc.

We could, and at some point probably will, rip the Times talking points to shreds. We’re not going to do that this evening. Rather, we’re going to let the Federal Reserve Banks make a different point for us.

Keep in mind that the October 5th Editorial was titled “The myth about job-killing Obamacare”.

The following is from the Fed’s January Beige Book. As heritage.org points out the Beige Book

…gathers anecdotal information on current economic conditions in its District through reports from Bank and Branch directors and interviews with key business contacts, economists, market experts, and other sources.

Here’s what the regional banks have found…

Boston Fed: “Downside risks include the upcoming costs to businesses of compliance with [Obamacare] and the trend toward office downsizing on a space-per-person basis” (p. I-3).

Philadelphia Fed: “Firms also expected to see the largest increase in health benefits costs compared with other input and labor costs in 2014” (pp. III-1 and III-2).

Keep in mind, also, that larger businesses where about 95% employer provided insurance comes from haven’t even seen what they’re really facing yet. That won’t happen until the third quarter when insurance companies finalize and submit their rates/plans to the state insurance commissioners.

We can’t wait to see how long it takes for the major media to discover this completely unexpected occurrence and grill the President about it at his next news conference. 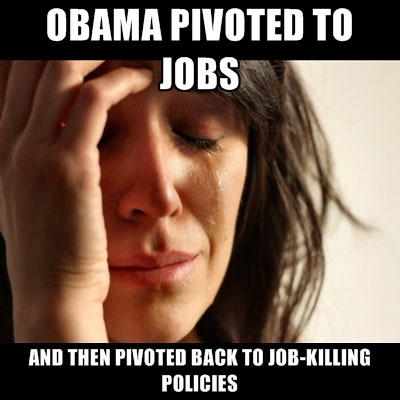