Home
Politicians
So you don’t like the Republican Party of John McCain?

Republicans. The Stupid Party. The Party of John McCain, Lindsay Graham, and John Boehner. The Party that believes in implementing the Democratic Platform, just a week or two more slowly than the Democrats, and they’ll reduce spending not by making government smaller but by making it “more efficient”.

Let’s start a Third Party!! That is a loser of an idea. Just ask President Al Gore what he thinks of the Green Party. Or two term President George HW Bush about Ross Perot.

Third parties are the dumbest ideas since the idea of feeding cake to French peasants. The absolutely accomplish something, they allow for the election of the least desirable candidate of those supporting the third party.

On the conservative side of the spectrum a third party would have no elected officials anywhere. The Socialist Party has more elected officials in the US than does all center-right non-Republican groups, and they have one – a city council member in Seattle.

In addition, a third party would have no ballot access in any state and no money. Oh, and did we mention, no candidates with any kind of name recognition.

Other than those little thingys a Third Party is a shoo-in.

Then there’s the “If I can’t vote for a ‘True Conservative” I’m staying home.” Those are the folks who defeated Mitt Romney. Now we’re not big fans of Mitt for anything but a good neighbor, but if anyone tells us that he wouldn’t be a phenomenal improvement over the current occupant of the Oval Office had better duck. If you believe that, you’re irreparablely stupid.

Well, we can do what some acquaintances of mine have done here in Arizona. You take over the State Party in your state, and you get a chance to do this with elected officials who are sell-outs in your state.

Delivering a strong rebuke to U.S. Sen. John McCain, Arizona Republicans passed a resolution to censure the one-time presidential nominee for what they characterize as a liberal record that has been “disastrous and harmful” to the state and nation.

While McCain is a political star on the national stage, for years he has had to contend with vocal critics in his home state, who accuse him of betraying the Grand Old Party’s principles.

Saturday’s censure came two weeks after the Maricopa County Republican Party passed a resolution to censure the senator on a 1,150-to-351 vote.

McCain and his ilk will say that “censure doesn’t mean anything”, and they’re absolutely right, in terms of substance in 2014. It would be embarrassing if McCain gave a damn about Arizona Republicans or even Arizona citizens. He doesn’t, he lives inside the beltway in a condo his very wealthy wife bought him. He comes back to Arizona only when he absolutely has to. 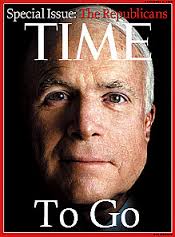 Nothing can be done to move Senator McCain to the right, and he can’t be removed from office short of retirement or losing an election. US Senators cannot be recalled.

Come 2016, if McCain thinks he might want to run for reelection, he will find himself in a situation where he doesn’t have the support of the Republican Party in Arizona in the primary. That will make a difference. He won’t have access to any of the things that incumbency provides with the exception of out-of-state money and he’ll have lots of that, he always does. He’ll face commercials showing every elected Republican in the state – with the possible exception of Jeff Flake – endorsing McCain’s primary opponent and talking about what a shameful old fool McCain is.

If you’d like to make a difference in your state, you can start working within the Republican Party to take over your district committee and your state party for conservative values. It’s hard work but it’s not difficult.

Precinct Committeemen (PC) are the people who actually run the party. They are the people who make up the voting contingent of the Republican Party on all party issues. Nationally, over half of the PC positions are vacant and a plurality of the ones that are taken are occupied by McCain-Chamber of Commerce Republicans who push the Party to the left.

Become a PC, recruit your conservative friends to be PCs and you can be part of what’s happening here in Arizona. We all loved the Tea Party rallies where hundreds of thousands turn out to demonstrate for conservative values. As it happens, a thousand or so conservatives can have a much bigger impact on the direction of the Republican Party and the nation by becoming PCs.

You need to be involved. You CAN be the difference.

Some people are taking a lesson from Arizona’s conservatives. In Lindsay Graham’s home state of South Carolina, the Spartanburg Tea Party is on the case. If you follow the link, you see what’s happening in Graham’s back yard.

You can find out how to move your state to the right. Check out The Precinct Project for details on exactly what you have to do in your state. Check out their Blog for specifics on the Projects along with some great videos.

So, we’ve said all that to say this. Get off your couch. Find out what you need to do to become a PC in your state. Your kids and grandkids are depending on you.