2) (fustian24) – “One of these is a big whiney baby, always throwing tantrums when he doesn’t get his way, and craps on everything. The other is wearing red.”

3) (guido81_MA) – “This went on for hours as President Obama could not lower his head to see his teleprompter to read, ‘Stop it, young man!’”

5) (westcoastwiser) – “And here we have the latest victim of the ‘knockout game’.”

6) (yetanotherjohn) – “Apparently taking candy from a baby isn’t as easy for Obama as one might think.”

The Readers Choice Award went to Paul Hooson’s (yes you read that correctly) winning entry. In its place we offer one more excellent, if overlooked, entry:

(Rodney Dill) – “The hand of knowledge meets the seat of ignorance.” 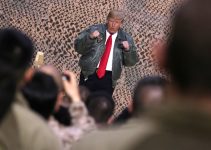