As Obamacare continues to spiral down into an ever deeper morass, Democrats are coming to understand that the law will be an anchor around their necks in the upcoming 2014 midterm elections and so they badly want the mess fixed before it is too late. Now they are urging Obama to pick another czar to fix the healthcare law, this time calling the position a “CEO” for Obamacare.

According to Newsmax, Obama’s supporters have been quietly pushing the President to appoint a single person, a “CEO” of sorts, to head up the fixes for the President’s disastrous takeover of our nation’s healthcare system.

One advocate of this scheme is reportedly Ezekiel Emanuel, one of Obama’s chief healthcare advisors and brother to Chicago Mayor Rahm Emanuel. Ezekiel is part of the extremist, left-wing, George Soros-funded, anti-American organization misleadingly called the Center for American Progress (CAP), so those folks are behind this hail Mary pass, too.

The White House has said that there are no plans for following through with this CEO idea, but Obama also just brought CAP’s hatchet man, John Podesta, back into the White House as an advisor and attack dog. So, the idea is now “in house,” if you will.

But Obamacare supporters are saying that this idea can help put the hated law back in America’s good graces, especially if the CEO picked is someone the people can trust.

You know, like America used to trust Obama himself. I say used to, because that was before we all fully realized he was lying to our collective face when he said we could keep our healthcare plans “if we liked them.”

Still, this CEO idea does have its merits if you are one of those that want to continue pulling the wool over everyone’s eyes as you march toward a 100 percent take over of healthcare by the government.

After all, if a trusted CEO-type candidate is chosen and foolish people come to imagine he might be able to fix the failed law, such a person might help cause favorable ratings for the law take an uptick. This will give those looking to destroy private healthcare more time to complete their task.

In any case, Obama is in a pickle with this whole “man-made disaster” that is Obamacare.

What do you think? Do you like the “Obamacare CEO” idea? Or would you rather see the whole thing repealed?

MSNBC: So Stupid That They Say Sarah Palin's Christmas Trees Are 'Un-Christian'
Howard Dean gets his rosy ObamaCare predictions stuffed where the sun doesn’t shine 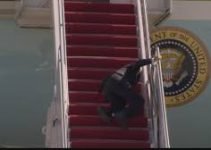