Last week’s Weekend Caption Contest™ was another serious success. Not wanting to go into this coming weekend’s contest with a backlog of judging to do, I managed to get caught up. The assignment last week was to caption the following picture: 2) (Rodney Dill) – “The line for free stuff from Obama Claus is long this year.”

4) (jim_m) – “Black Friday is like going to a hockey game. People come with their camera phones just to see the fights.”

6) (yetanotherjohn) – “Why do they call it Black Friday? It looks mostly white with a little Asian.”

The Readers Choice Award went to:

(yetanotherjohn) – “Looks like the EBT cards are messed up again.”

That’s all for this contest. A new edition of the Wizbang Weekend Caption Contest™ will debut in a few hours, early on Friday morning. 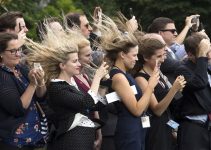