Home
Asshats
Will Michelle Obama Run for President in 2016?

Rumors are heating up that Michelle Obama will edge out Hillary Clinton for the Democrat nomination for president in the upcoming 2016 race for the White House. How’s that for scary, eh?

Rumors have been making the rounds that Barack expects to push his wife into the spotlight in order to finally destroy the Clinton machine and put himself 100% in charge of the American far left and its power base, the Democrat Party.

Right now, Barack is still in competition with Bill and Hillary. The Media still runs to the aging horndog that was once our president for his thoughts on the issues. This is galling to Barack who thinks the sun revolves around him in the political universe.

Note that President Obama has built an entire campaign edifice that has not turned its resources over to the Democrat Party.

Obama’s Organizing for Action (which used to be Obama for America) is still in full operation and is used solely to raise money for Obama and his personal causes as well as for pushing his own political message. This billion dollar organizing machine has not turned its gigantic email list over to the Democrat Party nor has it lent is vast online capabilities to the Democrat Party.

In fact, currently the Democrat Party is out of money, nearly broke as it is reported. But notice also that OFA is not out of money and has made no effort to help the DNC recoup its losses.

So, what is Obama to do with this giant campaign machine if he isn’t helping any Democrats with it? Many think he’ll use it to push his wife for 2016.

Then we can have the destruction of America continue along Barack’s ideological basis with eight years of a “historic” first black, female president, Michelle Obama–the way the media will sell it.

After that… can Barack himself run again?

One person poo-pooing the idea is Rush Limbaugh. He says he doesn’t think it’ll happen. 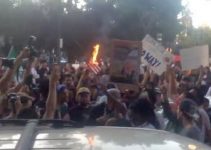