Don’t believe the media or the extremists in the Democrat Party when they say that the Republicans in the House of Representatives just voted to “shutdown government.” They did not. In fact, House Republicans just voted to fund every single thing government does… EXCEPT the ruinous government take over of our healthcare system called Obamacare. 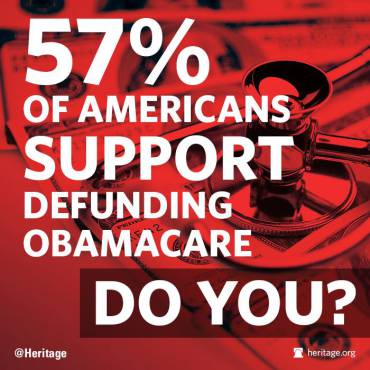 Also don’t just accept the far left’s claim that this is a waste of time because the Senate won’t agree to the vote and it will just die unaccepted. In fact, this is where you step in by calling your Senators to tell them to join the House in defunding Obamacare.

This morning the House voted on what is called a continuing resolution, a temporary budget plan that funds government for a particular period of time short of the full year that a budget is supposed to cover. These CRs allocate money to the government and that is what was voted on today; a temporary budget.

Why temporary? Because Obama and his Democrats haven’t offered a full, one-year budget for five years, that’s why. So, Congress is stuck voting on temporary, short-term budgets called CRs.

Now, for the past few months the more conservative and economically logical Republicans in the House–and a few in the Senate like Senators Ted Cruz and Mike Lee–have been trying to get their fellows to agree to passing a budget that includes no money to implement Obamacare (i.e. to “defund” it).

Finally, after weeks of cajoling, the House agreed with the defunding plan in a 228 to 188 vote. Only one Republican bucked the plan and voted against the CR (Virginia’s Scott Rigell).

Only two Democrats voted for the CR, though (Utah’s Jim Matheson and N.C.’s Mike McIntyre).

So, conservatives won this skirmish. But there are still many battles ahead. Remember, it will be practically impossible to be rid of Obamacare if it ever gets implemented. Name all the government programs that are eliminated once they are found to be a bad idea? There really aren’t any. If Obamacare gets implemented we’ll be stuck with it and the country will certainly be destroyed as a result. Many say, not without justification, that this is just what Obama wants, the destruction of the USA.

Call your Senator and tell him to vote to defund Obamacare.