1) (Joe_Miller ) – “Birds fly by in the “Missing Man Formation,” a tribute to the empty Presidency of the past 5 years.”

3) (David Robertson) – “Going to the left again, Obama believes that going to the right is for the birds.”

4) (Par4Course) – “Disguised miniature drones fly in formation as the President circles the White House looking for a clue.”

6) (RadiCalMan) – “Where’s that Marine with the umbrella when you need him!”

In fact most of his policies are for the birds.” 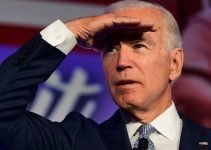