On Saturday I saw the new summer actioner White House Down and found the main conceit of the film laughably stupid, as is all Hollywood fare of this type. Oh, it was a fun flick if you just forget about reality, and I am not just talking about the comic book-like action sequences, either. No, the whole reason why the White House was coming “down,” as it were, was just plain idiotic.

The flick, starring Channing Tatum as a beleaguered Secret Service applicant and Jamie Foxx as the President of the United States, was typical of the over-the-top sort of action flicks that director Roland Emmerich and the those filmmakers like him are so wont to produce. Emmerich was the director of such films as Independence Day (1996) and The Day After Tomorrow (2004), so you know there are going to be big explosions and lots of bullets and car chases.

In fact, there was a sort of inside joke on director Emmerich’s penchant for destroying Washington when one character, a White House tour guide, pointed out that the main section of the White House was destroyed in Independence Day, a film Emmerich directed. 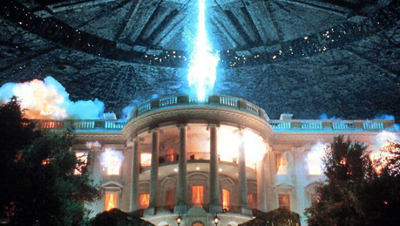 Still, it was a fun movie with gobs of action spiced with humor and delicious gotcha endings for the bad guys. It is taken from granted that no one human could survive what was thrown at Tatum’s character in the flick. You just have to go with it. And, instead of totally destroying the White House, in this fim Emmerich collapses the dome of the Capitol Building while leaving the White House a scarred, but still standing mess.

But the central premise of why the White House was being attacked was just the sort of empty headed, feelsgoodism that shows exactly why liberals should never be in charge of anything of importance.

Now, from here on I am going to talk about this specific plot point and while I will be careful not to reveal too much, it may contain some spoilers.

So, President James Sawyer (Jamie Foxx) has had a great idea to bring “peace” to the Middle East. He’s going to pull out all American forces from everywhere in the region. All of them.

This plan is referred to as a “peace plan” throughout the movie and serves as the president’s “big” idea that many oppose but is the “noble,” Lincolnian thing to do nonetheless. It is also the reason everyone from “white supremacists” to disgruntled Special Ops agents are out to get him.

But it’s not just hateful whities that are out to get President Sawyer. So too is the “military industrial complex,” those evil, rich, and powerful corporations that will lose money by having the U.S. pull out of the most volatile part of the world.

But, that aside, my main point here is to criticize the whole notion that what the president character in this movie is doing is a “peace plan” at all.

It would not however, be any sort of panacea-like “peace plan” for the Middle East. U.S. troops in the region are not used for first strike or belligerent missions and are far more often used as after-the-fact, peace-keeping forces. Also, their presence alone is a deterrent, especially against attacks on the lone democracy in the region, Israel.

Pulling U.S. forces out of the Middle East would certainly give Americans some peace, but nature abhors a vacuum and so do dictators and Islamists. If the U.S. left, lock, stock, and barrel from the region all at once, the people there would likely experience an upswing in violence as new forces vie to take control.

How long such small wars and insurrections would last is anybodies guess, but they’ve been going on since man could record history in the region, so interminably is the guess.

As violent as the region is, the U.S. has put a limited cap on violence there by stationing troops in the region since after WWII.

Of course, we can all argue–and legitimately–if it really is a waste of time to even try to cap violence in the Middle East or just how much the U.S. should be involved “in the sand box.” Our policy is a legitimate discussion.

Israel, would be the first to be attacked from without, of course, and without any help from the U.S.A. would have to resort to nuclear weapons out of utter necessity. Other nuclear-armed nations would respond with glee, naturally. And this would be only after some undetermined time of bloody internal fights in nearly every Islamic country in the region played out first.

The fact is, if the U.S. pulled out of the Middle East all at once it would not be anything near the “peace plan” as the movie portrays. Millions would die within only a few year’s time, if not even less.

That is hardly “peace.”

But this is the silly, uninformed, childish concept that lies at the core of this film, nonetheless.

So, don’t go to White House Down and expect cogent social commentary or a logical geopolitical discussion. Just go because stuff blows up and there are a few amusing one-liners.