Here’s a handy guide to refute the Gang of Eight’s talking points on immigration reform. At the bottom of the post is a list of telephone numbers and faxes for key US Senators, please call them once a day and speak to one talking point daily. If you can’t speak to a staffer, leave a message. As always, be polite.

Beginning on Monday, I’ll be posting a letter you can copy and paste into a fax on each of these talking points.

No “public charge.” Must earn 125% of poverty line

“Back of the line”

Cost of the bill.

What can you do? Well for starters use the “Share” button at top of this article to forward a link of this series to everybody you know and follow up with them encouraging them to take action.

Call you US Senators and tell them to vote NO! Your talking points are all laid out above.

Call your Congressman and let him or her know that you want this immigration fiasco stopped. Again, talking points are supplied.

Ask your friends and family to make a call as well. We’ve made it easy for you, click below and you can get your representative’s numbers and you can send them a fax letting them know that you want Security First!

Our Nation is hanging in the balance and we’re running out of time. 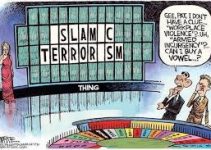