This week’s Weekend Caption Contest™ was a little out of the ordinary, but still another stellar success. The assignment this week was to caption the following picture: 1) (David Robertson) – “Virgins in Heaven have an excellent view of the Islamic terrorists in Hell.”

2) (Proof) – “The reality show “Bungee Brides” never really took off, but not for lack of participants.”

4) (Greg Wood) – “Frustrated wives of Wizbang writers tired of trying to get their husbands’ attention. Decide to marry each other instead.”

6) (Rodney Dill) – “All men need to do is build the other half of the bridge of communication…. Cha! and monkeys might fly out my butt.”

(fustian24) – “Wonder who the husband is? I thought it took government to screw that many people!”

Resident Admits Tsarnaev's Hate For US is Typical in Cambridge
Dear TV, I Don't Care About Your 'Reality' 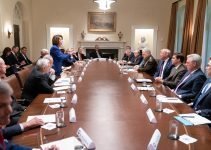