Famed anti-jihad activist Pamela Geller made a splash with her appearance at the special Breitbart breakout panel, “The Uninvited,” at this year’s Conservative Political Action Conference (CPAC).

In true Breitbart fashion, Breitbart News–itself a sponsor of the 2013 CPAC–held its own panel and stocked it with some of those voices that were systematically prevented from officially speaking at the conservative event. Seeking to engage with voices beyond those approved by both the Old Media and the GOP establishment, Breitbart News sponsored “The Uninvited,” a panel featuring topics, experts, and personalities that were absent from CPAC this year.

Of the many outspoken guests, Pamela Geller has a record of raising the hackles of the liberal media and even some on the right that are squeamish of her topics and her command of the facts. Geller didn’t disappoint, either, when it came for her time to speak out that Saturday afternoon.

“Truth is the new hate speech,” Geller proclaimed. She went on to warn the audience of a “stealth jihad” that was being waged against free speech right here in America; a war meant to silence any dissent against sharia law and radical Islam. Geller was incensed noting that this stealth jihad is even being waged on behalf of radical Islam by the American right. She was sad to note that the right is too afraid to speak out for fear of being labeled Islamophobic.

All this, Geller hinted, is one of the reasons she had been barred from being part of the CPAC schedule. She went on to criticize CPAC for silencing this subject matter, something she called a crime.

“And that you have a gathering of 12,000 people that come here to get educated, to get activated, and you are not educating or activating them in the greatest national threat that this country faces is a crime. And for Al Cardenas to tell the Washington Post that I am banned because of this subject matter is egregious.”

Geller also reminded the audience that “Stealth Jihad” is the title of Robert Spencer’s book.

Next Geller stirred a wave of post CPAC criticism for saying that Suhail Khan is worse than Anwar al-Awlaki for having helped silence dissent both in America and at the CPAC conference.

“Now, am I saying that Suhail Khan is as bad as Awlaki? He’s worse,” Geller said. “He’s worse because look what he’s done to this conference, look at the influence that they have had on this conference.”

After the conference, Geller noted on her blog that she was beset with criticism for saying that Kahn was worse than Awlaki.

Geller also went into her various ad campaigns run on the New York subway system, on Chicago Buses and in San Francisco.

The thrust of her address was, of course, that we Americans are losing our right to free speech because too many are afraid to criticize radical Islam, sharia and jihadism. We need to take that right back, she warned, or we will lose everything. “The antidote to bad speech,” Geller said in summation, “is more speech” not less.

After the event was over, Geller was effusive about having been invited to speak at “The Uninvited.”

“It was a terrific panel, covering a wide range of topics,” Geller told Breitbart News.

“My topic being ‘The War on Free Speech,’ I was gratified that Breitbart News had the courage to invite me. The war on free speech, spearheaded by the Organization of Islamic Cooperation and its allied Islamic supremacist groups in the U.S., is much more pervasive than most people realize,” Geller said.

“One of its chief and least-noted manifestations is the willingness of conservatives, out of fear or ignorance or both, to acquiesce to the leftist/Islamic supremacist demonization and marginalization of voices of freedom,” she said.

“Kudos to the Breitbart organization for not playing along, and allowing discussion of this all-important issue.”

Transcrpit: Pam Geller at Breitbart’s ‘The Uninvited’ Panel at CPAC 2013

It is indeed an honor to be here and poetic justice that I’m speaking here at the invitation of the Breitbart organization. I mean talk about a divine hand, here. It’s really gorgeous. So thank you, Steve for allowing me to speak and address this critical, this critical conference.

If you look at the CPAC schedule over the past five years there is nothing–and I say nothing. Look, in over two dozen states there’s foreign law prohibition legislation moving through their state legislatures, anti-sharia bans. That takes a small army, that takes an enormous amount of manpower. How come it’s not being addressed here?

We’re thwarting jihadi attacks every week. A couple days ago, Oregon Muslim busted for aiding and abetting, uh, jihadi attack, uh, that killed thirty people. Two days ago an Imam in Florida was convicted of aiding and abetting Taliban terror. It’s all the time and the media is self-enforcing the sharia. OK. They will not discuss it.

Now, I’m going to tell you something. It is not Geller. OK? If I go out with a guy and if he doesn’t call me again, that’s Geller. He’s rejecting Geller, OK? This is not about Pamela Geller. It is about the subject matter and the war in the information battle space, the technique is to marginalize, demonize, and render radio active anyone that talks about it.

And that you have a gathering of 12,000 people that come here to get educated, to get activated, and you are not educating or activating them in the greatest national threat that this country faces is a crime. And for Al Cardenas to tell the Washington Post that I am banned because of this subject matter is egregious.

Now, am I saying that Suhail Khan is as bad as Awlaki? He’s worse. Listen to me! He’s worse because look what he’s done to this conference, look at the influence that they have had on this conference.

And so, the war on free speech manifests itself in our ad campaigns. And I’m going to go over it just briefly, OK? I am not being a provocateur. I am responding to a disinformation campaign in this country. Not one, not two, but three ant-Israel campaigns were running, hundreds of posters across the country. Nobody said boo, nobody.

And I can’t get these ads up. I’ve got to sue. You know why I have to sue? Because I’m insulting the savages, that’s why.

We sued. We got those ads up. I want you to know it wasn’t even a narrow victory, that First Amendment victory. We won on all counts. Judge Paul Engelmayer threw out the New York MTA rules and regulations and standards saying they were un-Constitutional. Now that’s a big free speech victory. Did they talk about it here ever, ever, ever?

So, this is their campaign: “My jihad is to stay to stay fit. My jihad is not to burn the toast in the morning.”

So, I created a campaign, yes, with five high profile Muslims. The Prime Minister of Turkey; lovely fellow. Anwa… I mean, Awlaki, he’s the next one. Um, Times Square bomber, Foot Hood jihadi, Hamas TV, and I couldn’t get them up. I submitted them at the same time as CAIR, OK? The city government was colluding, Chicago was colluding with CAIR to keep my ads off. But you know I’m going to win on the free speech issue. They had, you should have seen the letter from the Chicago transit, like “Well, these are so Islamophobic and we hate them and it’s so ugly and we hate you, but we know you’re gonna sue us so we’ll let you run the ad.”

So, this ad goes up, and this is Hamas MTV, it’s a music video that says, “killing Jews is worship as it draws us closer to Allah.”

Now, let me tell you something. The San Francisco District Attorney and the entire city council held a press conference to denounce me and to denounce my ads and called this ad Islamophobic. Really? This ad looks anti-Semitic to me.

This is hard wired for delusion. They will not speak out, the same day that this ad broke on the busses the hostages, British, Christians, French, the hostages in Nigeria were slaughtered. Did they have a press conference about that? The constant slaughter of Christians in Nigeria, Buddhists in Thailand, Coptic Christians in Egypt, bloggers being beheaded in Bangladesh, not a word. 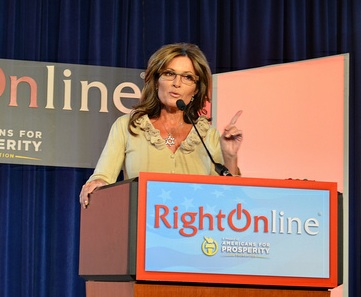