Home
Congress
CPAC 2013 Wrap Up: The Libertarians Take Over

On Saturday after noon they announced the winners of the straw poll giving us an idea of who the attendees of the event would like to see run for president this far out of 2016. Interestingly, no “establishment” pols appeared anywhere on the list. 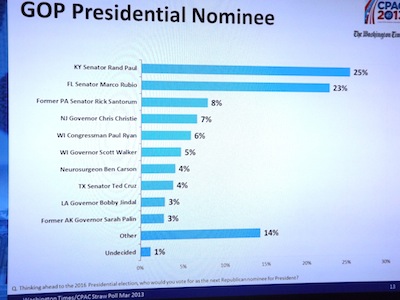 Here are the results:

So, what does this mean? As one person noted, the libertarians took over CPAC.

Note that all those above were non-establishment people with Rand being the most un-establishment of them all. But Rubio was opposed in his primary by both the Florida and national establishment (they all supported Charlie Crist who ended up switching parties to a Dem. after he lost), Santorum is no establishment guy, neither is Carson or Cruz. Christie is as close to establishment as it gets and even he isn’t totally “one of those” in many ways. I wouldn’t call Ryan an establishment guy, either, as he’s brought them to him–via his expertise on the budget–as opposed to him bending over backwards to join them as most do.

Interesting results. However, remember we are nearly 2 years away from ramping up for the 2016 run for president. So, this may be meaningless as to that race. It does, though, show that conservatives are drifting from Republican powermongers this year.

In the end, the only two speeches that had any real thrust to them were Rand Paul’s, Ben Carson’s, and Ted Cruz’. These were speeches with meat and an agenda–especially that of Ted Cruz. The sad thing is, most of these speeches are simple boilerplate. About the only way any of these speeches could have gotten any notice is if they were delivered poorly. It certainly isn’t because of what was in them.

This year’s speeches were nothing you couldn’t have heard at any Reagan Day dinner or some patriotic holiday rally. Nice for what they were, but instantly forgettable.

Anyway, it was an interesting event and, since I’ve done a lot of these conferences –and this is my fourth COAC–it is always great to see friends that I only get to see at these things.

(And I apologize for getting this up so late, but I tried to do this from the airport early this morning and it just wou

I’ll leave you all with some random photos. The Capitol at Night Rep. Greg Waldon, NRCC, and me