Home
Gun control
And so it begins

In a shameless rush to use the murders at Sandy Hook as a soapbox from which to show her ass to the law-abiding gun owners in America, perennial gun-grabber and all-around lackwit Dianne Feinstein (D, California) has released an outline of the gun control legislation she intends to introduce to the Senate in 2013.  Drawing on the previous lack of success demonstrated by the 1994 ban on assault weapons, the new and improved guidelines expand the number of weapons banned by name from 19 to 120 and further expands the definition of “assault weapon” to any weapon with a detachable magazine and one “military characteristic”.

But on the bright side, law-abiding gun owners can keep their weapons obtained legally before enactment of the ban by registering the weapon, passing yet another background check, submitting to fingerprinting, being photographed, and obtaining certification of local law enforcement.

Senator Feinstein noted, “This year will go down in history. For the first time, a civilized nation has full gun registration. Our streets will be safer, our police more efficient, and the world will follow our lead into the future!”

Wait, my mistake.  That was Chancellor Hitler in Germany circa 1933.  Sorry to delve into Godwin’s law territory right off the bat – especially since intrusive gun control laws have so many historical precedents.

In 1929, the Soviet Union established gun control. From 1929 to 1953, about 20 million dissidents, unable to defend themselves, were rounded up and exterminated.

In 1911, Turkey established gun control. From 1915 to 1917, 1.5 million Armenians, unable to defend themselves, were rounded up and exterminated.

Germany established gun control in 1938 and from 1939 to 1945, a total of 13 million Jews and others who were unable to defend themselves were rounded up and exterminated.

China established gun control in 1935.  From 1948 to 1952, 20 million political dissidents, unable to defend themselves, were rounded up and exterminated.

Cambodia established gun control in 1956.  From 1975 to 1977, one million “educated” people, unable to defend themselves, were rounded up and exterminated.

Defenseless people rounded up and exterminated in the 20th Century because of gun control = 56 million.

Do I believe Feinstein is paving the way for a systematic purge of dissidents?  No.  Like the rest of the road to Hell, her latest attempt to restrict the arms available to law-abiding citizens is surely paved with good intentions.  But it is, without a shadow of a doubt, an effort to ensure that the citizens of America are less well armed than their government overlords.

Here’s the full text of her announcement cribbed from her website:

Following is a summary of the 2013 legislation:

No mention of grandfathering large capacity magazines, so I assume that means the millions of Americans that own them now will instantly become criminals under a strict liability ban.  In other words, hand them over or go to jail.

I’m going to write to my new Senator, Ted Cruz, and ask that he attach a rider applying the proposed ban unconditionally to all security at the Capital building, White House, Secret Service, and to all personal security attached to members of Congress – i.e. no exemptions, no “assault weapons” and no magazines larger than 10 rounds.  It’s essential that they lead by example.

How could any politician who supports this legislation possibly oppose enjoying the same benefits such common-sense restrictions bequeath upon the people who sent them to Washington in the first place?

“Firearms stand next in importance to the constitution itself. They are the American people’s liberty teeth and keystone under independence … from the hour the Pilgrims landed to the present day, events, occurences and tendencies prove that to ensure peace security and happiness, the rifle and pistol are equally indispensable … the very atmosphere of firearms anywhere restrains evil interference — they deserve a place of honor with all that’s good.”
George Washington

“Are we at last brought to such humiliating and debasing degradation, that we cannot be trusted with arms for our defense? Where is the difference between having our arms in possession and under our direction and having them under the management of Congress? If our defense be the real object of having those arms, in whose hands can they be trusted with more propriety, or equal safety to us, as in our own hands?”
Patrick Henry

“The best we can help for concerning the people at large is that they be properly armed.”
Alexander Hamilton

“What country can preserve its liberties if their rulers are not warned from time to time that their people preserve the spirit of resistance. Let them take arms.”
Thomas Jefferson

“The greatest danger to American freedom is a government that ignores the Constitution.”
Thomas Jefferson

Senator Feinstein surely means to govern well and be a good master.  She and her ilk view the Constitution as an impediment to governing well and being a good master.  Seeing her dance on the graves in Newtown to advance her hackneyed belief that the federal government can somehow legislate the next determined dirtbag from killing is a sickening sight, but not at all surprising.  When your only tool is prohibition, every problem looks like something the government can solve with more prohibition. 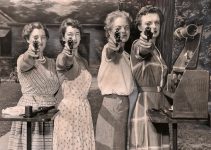