Charlie Crist is one of the worst examples of a whining “moderate” Republican that got all mad because after his last campaign imploded due to his own idiotic embrace of President Obama, Republicans pushed him off at arms length. Well, now his traitorous trajectory is complete. Tonight he Tweeted that he is now officially a Democrat.

“Proud and honored to join the Democratic Party in the home of President,” the now former Republican Tweeted.

There really isn’t anyone in the GOP, moderate or otherwise, that will miss Charlie Crist. His political career is totally done, and he is no loss to the party at all.

But, whatever the case, he’s now a Democrat. I feel bad for them over this.

Naturally the speculation will begin anew over his sexual orientation. Now that he isn’t a Republican, I’ve already seen some people ask if he’ll get rid of his “beard.” For those unaware, a “beard” is wife — a real female wife — that a gay man marries in order to hide his homosexuality.

Folks have been speculating about Crist’s sexuality for years, but he has always said he is not gay and “proves that” by having married the beautiful Mrs. Crist — and she is a looker, too.

But now that he’s a Democrat and there is no need to act as if he’s straight, will he come out of the closet?

Of course, there is a reason that this will be the main question everyone has on his mind. After all, Crist, 56, has no political career in the offing. He’s a has been. These days he is little else but a crude curiosity.

The image to the upper left is the photo Mr. Crist posted to Twitter showing him holding his new Democrat registration.

Nick Newell Won A MMA Championship With One Hand
Jacintha Saldanha, One Of The Nurses Who Got Royally Pranked By Australian DJs, Killed Herself 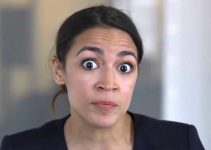