An estimated 20,000 people turned out Saturday In Milwaukee for an Obama rally, featuring a mini-concert by Katy Perry, who donned a tight blue dress with the president’s reelection slogan “Forward.”

…Saturday marked the singer’s third appearance on the campaign trail for Obama. She’s consistently been one of the president’s most popular rally performers. More than 13,000 turned out to see Obama and Perry in Las Vegas last month. At that show, the singer donned a tight white dress imprinted with a giant ballot. At a concert fundraiser in Los Angeles, the pop star wore a red, white and blue cape and a Statue of Liberty outfit. Perry designs the Obama dresses herself, then styles theme with her team.

Obama took the stage following Perry’s performance in Milwaukee. He told the crowd: “I just have to say Katy has been working so hard these last couple of weeks, and I’m so grateful to her.”

Gone are the days of giant Obama crowds. Now he really needs his celebrity support.

Mitt Romney, on the other hand, is packing them in. His Ohio rally with Kid Rock, Bobby Jindal, John McCain, Rubio, and Rudy Giuliani drew 30,000. There hasn’t been a detailed analysis done, but the anecdotal evidence is that Romney is outdrawing the President all over the place.

Drudge really nailed it with this:

And yes, this is whole thing is a pretty good excuse to post some Katy Perry picture. Politics aside, she seems like a pretty decent person and I know my kids love her music. 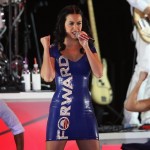 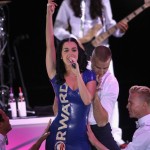 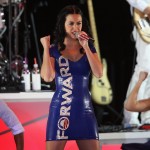 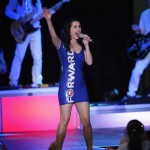 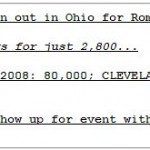 Obama Attached Himself To Hurricane Sandy, As Full Picture Emerges He May Wish He Didn't
Obama's Notorious 'First Time' Ad Ripped Off From Australia?