Home
Categories
According to Gallup, Romney Should Win

Like a lot of folks, I follow opinion polls.  Unlike a lot of people, I remember what I learned in my Statistics classes.  This means that I try not to make the most common mistakes which happen when folks read and discuss polls.   I have examined historical trends and the relevant vectors of this election in theGalluppoll, and find significant evidence that the Republicans’ ticket of Romney & Ryan will defeat the Democrats’ ticket of Obama & Biden.

First, some points about the polls.  Political opinion polls are useful indicators of the public mood, but there are a number of common errors in their consideration.  One of the most common mistakes is aggregation; Aggregation is a mistake because different polls use different methodologies, often slight in variation but distinct in effect.  One poll may consult ‘Likely Voters’ while another asks ‘Registered Voters’ (while another may just ask ‘Adults’ and different polls may have different standards for determining who is a ‘Likely Voter’), polls differ in weighting demographic samples, party affiliation, and other significant vectors.  Statistics is only valid if consistent methods  are used, and aggregating results from different polls invalidates conclusions by mixing methods.  A way to understand this would be if a patient needs to lose weight.  He weighs himself on his home scale and it reads 240 pounds.  At his doctor’s office, however, the scale reads 243 pounds.  If you believe the doctor’s scale is more accurate than his home scale that’s fine, but let’s say the same patient exercises a bit more and watches his diet a little better.  If his home scale tells him he now weighs 235, while we may expect the doctor’s scale to be different we would expect to see the same amount of weight loss on that scale.  Similarly, a more effective way to read opinion polls is not to compare Poll A to Poll B, but to note trends in each poll over time, or look at one poll in detail, considering historical behavior as well as current statements.  In other words, a political opinion poll should be considered valid if that poll uses reasonable and consistent methodology, shows how it reaches its results, and is willing to report its history against actual election results.

At this time, the only national opinion poll which meets all three conditions at a high level of veracity is the Gallup Organization.  Other polls may well use consistent methodology, but most will only publish detailed demographics for ‘premium’ customers, and few have even been in business for more than a decade, let alone since the FDR Administration.  What’s more, the Gallup people quite openly publish their track record, mistakes and goofs along with their successes, which is not only unique but generates strong credibility for Gallup.  Frankly, I’ve been watching and evaluating polls since 2000 in as much detail as I can, and no one else comes close toGallupfor reliability.  So, for this essay I am considering the available information fromGallup.

So, let’s start with today’s numbers.  The good news for President Obama is thatGallupshows him with a 1 point lead over Governor Romney, 47% to 46%.

But President Obama’s Job Approval is down to 43%.  That number is a big problem for Obama, so let’s start there. Galluplists the historical track record of Presidential Job Approval, and this can be compared to election results.

There have been sixteen Presidential elections since World War 2, of which ten featured a sitting President on the ticket.  Gallup’s record shows that no Job Approval poll was taken for Truman between July and October of 1948, so that limits us to consider the nine remaining elections:

Of those nine elections, the incumbent had a 1.1% loss between his Labor Day Job Approval and the Election Results (indicating Obama could finish with just 41.9% of the Popular Vote), but in the three elections with a Democrat President and a Labor Day Job Approval rating, the incumbent lost 4.8% between the Job Approval and the Election Results.  If that last trends holds true this year, President Obama may finish with less than forty percent of the Popular Vote.  The reason I do not think this likely, is because only three elections are on record with a Democrat Incumbent, too few to establish a reliable statistical sample.  Nonetheless, President Obama’s poor Job Approval as of today is a bad sign for his election results.

Gallupalso publishes the poll results for the Presidential elections it has covered.  In these elections, the September 1 poll results may be compared to the actual election results, as a means to determine how accurate those polls are in predicting outcome and the resolution of undecided voters.  The record of polls from the relevant elections can be found here:

There are fifteen Presidential elections after the World War 2, for which a late August or early September poll was taken which could be said to represent the Labor Day sentiment.  Of those fifteen polls, the Democrat candidate gained an average 1.6% from September to the election, while the Republican candidate gained an average 4.2%.  Matched toGallup’s present polling, this would project a 50.2% to 48.6% Romney victory.

When only elections with a Democrat incumbent are considered, the change from Labor Day polling to the election is a 0.5% loss for the Democrat, and a 7.7% gain for the Republican challenger.  Clearly, is accurate this trend would project a decisive win for Romney.

All of this may seem tenuous, but for two salient factors still to be considered.

First, all elections depend in large part on the enthusiasm of the party base.  It’s no wild guess to expect that Republicans will vote for Romney, or that Democrats will vote for Obama.  The questions, then, come down to how independents will vote, and how many Republicans and Democrats show up at the polls.  In 2008, strong Democrat enthusiasm for Obama coupled with lukewarm Republican support for McCain, created a clear Democrat advantage at the polls, which produced a clear majority in the election.  In 2004, both parties showed strong energy which kept the election close;Gallup’s final poll in 2004 showed a 49-49 tie.   With this in mind, consider the following article fromGallup:

The article shows a lead for Republican energy over the Democrats, especially when asking who is following the election “very closely”.

Next, consider the question of the undecided voters.  Gallup’s poll reflects a seven percent undecided portion, a number not only well beyond both the statistical margin of error and the margin between the two candidates, but consistent with most presidential elections at this point in the election.  Of the nine elections with a sitting President as candidate, six had undecided numbers between six and seven percent.  It is an important consideration, then, to see what happened with those voters.  Over the six elections with comparable undecided portions, the Republican took fifteen times as many voters as the Democrat (an average gain of 3.0% against a Democrat gain of 0.2%).  When all nine are considered, the advantage grows to a Republican average gain 4.5%, versus a Democrat gain of 0.3%.  Again, this favors Romney in this election.

But why should Romney claim more of the undecided voters than Obama?  The answer comes from the three kinds of efforts a candidate must make in an election.  A candidate for President must do three things, ignoring none of them:

To see how this plays out, consider 2004 and 2008.  In 2004, Bush was able to run on his record, while Kerry had to establish his identity for voters.  This gave Bush an initial advantage he was able to ride to re-election.  In 2008, however, neither Obama nor McCain had an executive record on which to run, so the decision came down to creating an attractive identity, where Obama’s eloquence made the difference.  This year, Obama will be judged on his record, against Romney’s image as a potential successor.  As noted before, most Democrats and Republicans will have already decided to back their party’s candidate, leaving only a few Democrats and Republicans, along with the Independents,  to hand out the remaining votes.  Obama has enjoyed support above 48% only once, and has spent most of the General Election locked in at 47%.  Frankly, the only way Obama can significantly increase his numbers would be for Romney to commit some blunder that seriously damaged his numbers and led to voters making late choice changes.  This is what happened in 2008, when Sarah Palin’s misstatements created doubts about McCain’s judgment, resulting in nearly a ten-point loss of support in a couple weeks, with Obama the happy beneficiary.  The problem for Obama this year, is two-fold:  First, Obama’s camp has to deal with mis-statements by both the President and his vice-president. Second, Romney’s choice of Ryan created an issues-focused team that may not be the most exciting in memory, but which is going to be focused and clear.  In short, the voters know all about Obama and Biden, but some are still learning about Romney and Ryan, creating opportunity to the Republicans to gain support beyond what they have now.  At this time, the numbers suggest Romney is in a much stronger strategic position. Bill Clinton to Ted Kennedy: In The Past, Obama Would Be 'Carrying our Bags'
But he's so likeable 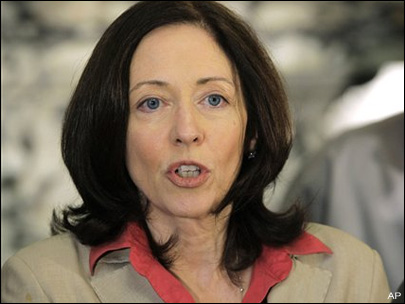