As Lord Acton said, “Power tends to corrupt, and absolute power corrupts absolutely.” Such is the case in Prague, Oklahoma.

PRAGUE (NewsOK) — David Nootbaar said it’s sadly ironic that his daughter, Kaitlin, was denied her diploma for saying “hell” in her valedictorian speech for Prague High School, where the mascot is the Red Devil.

“In church on Sunday they say ‘hell’ at least four times,” Nootbaar said, standing across from the school district’s office, which includes an electronic marquee showing a small demon holding a pitchfork.

…[Kaitlin wrote on Facebook Monday] “First off, I would like to thank everyone who is backing me on this, especially my friends and family. And to those who don’t agree with me, that is fine also. Everyone is entitled to their own opinion,” she wrote in a Facebook post Monday.

David Nootbaar said his daughter used the word in reference to not knowing what she was going to do after graduation. “Who the hell knows?”

When tasked with writing the graduation speech, her dad said she got her inspiration from the movie “The Twilight Saga: Eclipse”.

“Her quote was, When she first started school she wanted to be a nurse, then a veterinarian and now that she was getting closer to graduation, people would ask her, ‘What do you want to do?’ and she said ‘How the hell do I know? I’ve changed my mind so many times'” Nootbar explains.

In the written script Kaitlin gave to the school she wrote “heck,” but in the moment she said “hell” instead.

Nootbaar said the audience laughed, she finished her speech to warm applause and didn’t know there was a problem until she went to pick up the real certificate this week.

“We went to the office and asked for the diploma and the principal said, ‘Your diploma is right here but you’re not getting it. Close the door; we have a problem,'” Nootbaar said.

The principal told Kaitlin she would have to write an apology letter before he would release the diploma.

The only purpose being served here is the petty spitefulness of a principal drunk on power. The only authority the school has is to withhold a piece of paper; they are barred by state law from denying Kaitlin her official transcript that shows her completed courses and graduation. Katlin was accepted to a local college with a full scholarship, which makes the situation all the more inane.

Perhaps Kaitlin will learn the lesson that those much older than her already know. If you go on to graduate from college know one will ever care about your high school career again… 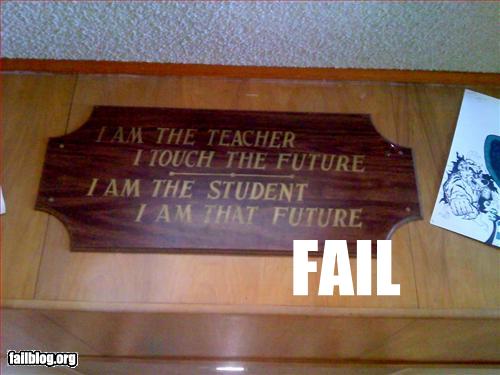