One of the things that a vice presidential candidate has to be able to do and do well is be an attack dog for the ticket. The best VP candidates have both the credibility and the capability to severely criticize the other team. Even before being picked as his running mate by Mitt Romney, Paul Ryan had proven that he is that man.

Ryan has been the President’s sore spot since the budget and Obamacare debates began early in Obama’s stint in the White House and making him a veep pick for the Republicans is sure to cause no end of heartburn to a president that clearly doesn’t grasp the economic destruction that his own policies have wrought.

Months ago Rep. Ryan had already gotten under Obama’s skin. If you’ll recall in April of 2011 President Obama went out of his way to invite the Republican to a special speech on the budget and then, quite ungraciously slammed him in the speech — without having the decency to either address him or look him in the eye. 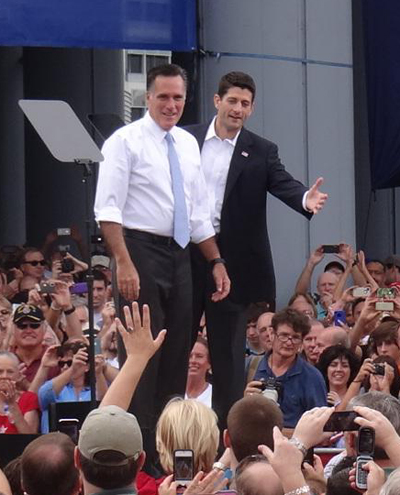 Imagine the ignorance of this and how it lowered the office of the President. To have arranged a speech, invited an political opponent, and then dissed him in public like that is the sort of low action of a petty man, not the high actions of a President. And for a President to attack a mere House member at that!

It is patently obvious that President Obama is unnerved by Paul Ryan. And it’s no wonder. You might also recall how Ryan wholly eviscerated Obama’s poor attempt at a budget back in Fed. of 2010.

Medicare right now has a $38 trillion dollar unfunded liability, that’s 38 trillion in empty promises to my parent’s generation, our generation, and our kid’s generation. Medicaid is growing at 21% this year. It’s suffocating states’ budgets, it’s adding trillions in obligations that we have no means to pay for.

…Since the Congressional Budget Office can’t score your bill because it doesn’t have sufficient detail, but it tracks very similar to the Senate bill, I want to unpack the Senate score a little bit. And if you take a look at these CBO analysis, analysis from your chief actuary, I think it’s very revealing. This bill does not control costs. This bill does not reduce deficits. Instead this bill adds a new health care entitlement at a time when we have no idea how to pay for the entitlements we already have

…The Senate Budget Committee chairman said that this is a Ponzi scheme that would make Bernie Madoff proud.

…. when you strip out the double counting and what I would call these gimmicks, the full ten-year cost of this bill is a 460 billion dollar deficit. The second ten-year cost of this bill has a 3.4 trillion dollar deficit. And I think probably the most cynical gimmick in this bill is something that we all probably agree on. We don’t think we should cut doctors 21% next year.. we all call this the “doc fix.” Well the doc fix according to your numbers costs 371 billion dollars. It was in the first iteration of all these bills but because it was a big price tag and it made the score look bad and made it look like a deficit that provision was taken out… but ignoring these costs does not remove them from the backs of tax payers. Hiding spending does not reduce spending.

Ryan has been a major critic of Obama since the begining. Also in Feb. of 2010, for instance, he quizzed Treasury Secretary Tim Geithner asking him during a House Ways and Means Committee hearing why the Obama administration would propose a budget that they admit is not credible or sustainable?

Rep. Ryan was also the man the GOP turned to in order to respond to Obama’s 2011 state of the union speech.

Ryan slammed the President for his actions saying, “Unfortunately, instead of restoring the fundamentals of economic growth, he engaged in a stimulus spending spree that not only failed to deliver on its promise to create jobs but also plunged us even deeper into debt.”

Ryan also criticized the President and his party just before the 2012 state of the unions speech stating that Obama had failed to provide leadership on reducing the deficit.

Repeatedly Obama has targeted Paul Ryan, singled him out for attack, because Ryan so gets under the president’s already thin skin and repeatedly Ryan has risen to the challenge and delivered devastating blows exposing Obama’s flimsy knowledge of budgets and his fraudulent claims of “fixing” it. And throughout Ryan’s criticism has been fact-based and respectful of the office of the president.

This is a good pick for Romney as the President of FreedomWorks, Matt Kibbe, notes. On the morning of the announcement, Kibbe expressed the enthusiasm for the Romney ticket that picking Ryan brings.

That said, Romney made a good choice — a great choice in fact. It was a real indication to grassroots America that the Romney camp is willing to finally engage on the big issues that matter most in this election. It’s not quite enough to say that Obama has failed, we know that. Incumbent presidents should not win reelection with persistent unemployment over 8 percent and a staggering $16 trillion in debt. Clearly Obama needs to be fired. But what are you, the Republicans, actually for?

Paul Ryan has already unhinged this President and his Party and has repeatedly been able to slam them in the best possible manner. Ryan fulfills the role of attack dog well and has since before Romney even picked him to be his veep candidate.