The Midwest has been suffering a major drought this year, one that will surely cost us all in higher food prices over the coming years. Fox Business Network has been literally flying the friendly skies — in a helicopter — to cover it.

FBN’s intrepid reporter of the skies, Jeff Flock, has been touring the Midwest reviewing the effects of the drought and covering the devastation it’ll wreck on the country.

Flock has literally been flying around in a helicopter covering the drought. Yesterday I got some updates on Flock’s journey right from the whirley-rider himself. 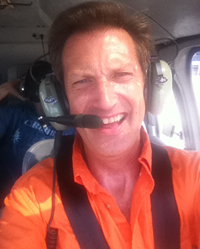 Over the past month our team has reported live from corn fields already lost to the drought, irrigated fields with corn plants over your head, a grain elevator that expanded to hold what was expected to be a record harvest, and a dairy farm using fans and spraying cows with water to keep their herds cool. I’ve also been to the corn and bean pits at the CME where traders have bid up both commodities to record levels. And I’ve also reported from a chopper 1200 feet in the air over the drought-baked Midwest landscape.

Each of our stops has brought a texture to what is a complicated and compelling story that has yet to fully unfold. Over the fields in Sugar Grove, Illinois

Take Thursday’s chopper trip over the farm town of Sugar Grove, Illinois. The country singer Jason Aldean has a song called “Flyover States” which is about the Midwest and how people on the coasts only know the likes of Indiana, Missouri, Iowa and Illinois from flying over but never stopping in them. Just like in the song, we found that just flying over gives a skewed picture of the drought.

For instance, because of recent rains much of the corn and soybean crop has “greened up.” What was looking brown and parched last week has taken on a lush look from the air. Yes, there are still brown spots and entire fields visible that have already been chopped for silage or in the case of the driest spots, mowed down as completely useless. But the predominant color from the air is green which might give the impression the drought is over.

Sugar Grove grain farmer Jeff Borneman told us that while the plants look okay to the casual observer, the fact is the yields will be cut dramatically. And no amount of rain after this will help. This is why after a couple days of profit-taking and price drops on grains, the rally at the CME has resumed. Looking at the crop in the field from both the air and on the ground it’s easy to see why Goldman Sachs said this week that $9/bushel corn and $20/bushel soybeans is possible. Stocks of both crops coming into this year were extremely tight and with drought in South American bean fields and similar dry conditions in Europe, the world supply of these two crucially important grains figures to remain low putting prices at a premium here in the biggest corn and bean producing country in the world.

The good news in this is that farmers who do harvest a crop will likely be getting premium prices. Reporting from the fields in Knox, Indiana

We visited fields in northern Indiana under irrigation to see what corn with normal moisture looks like. Though costly to set up, farmers who have sandy soil that doesn’t hold moisture very well find it makes sense for them. This year, because of the ability to provide consistent “rainfall” to their crops, they will have normal yields but instead of selling at normal prices ($4/bushel or so) their corn will likely fetch twice that.

I covered the nation’s last widespread drought in 1988 (See my ear of corn a souvenir from that reportage). Though the later developing bean crop could still be rescued by solid rainfall over the rest of the summer, 2012 still has the potential to rival ’88 in severity and, because of tight stockpiles and increased world demand, could have even more far-reaching impacts than that last worst drought almost a quarter century ago.

Look for Flock’s reports on Fox Business Network. Check your cable provider to see where you can find it and if your service doesn’t offer FBN, be sure to ask them for it.