Seven minutes of “f**king humiliation” is how one CNN staffer described the morning faux pas the “most trusted name in news” made when it reported that Chief Justice John Roberts overturned Obamacare’s mandate this morning.

As the Supreme Court of the United States was delivering its long awaited decision on Obamacare, CNN’s on-air news reader, 29-year-old Kate Bolduan, breathlessly said that the healthcare mandate was struck down. And I do mean breathlessly…

Kate Bolduan: We’re still going through the reading of the opinion, but I want to bring you the breaking news that according to producer Bill Mears, the individual mandate is not a valid, uh, not a valid exercise of the Commerce Clause. So it appears as if the Supreme Court Justices have struck down the individual mandate, the center piece of the healthcare legislation.

Not only did Miss Bolduan make CNN look bad but she also claimed that CNN’s man inside the courtroom, Bill Mears, told her this misconstruction of the facts over the phone. It doesn’t appear, though, that Mears actually said the whole thing was struck down but that young Bolduan just didn’t understand the complexities that Mears was trying to relate.

Bolduan simply jumped to a conclusion and went with it despite not understanding what was going on.

Of course, the truth is that Chief Justice Roberts and the majority of the SCOTUS Justices did not invalidate the mandate. Indeed, they upheld the odious idea and further stated that all Obama’s pre-passage claims that Obamacare is not a tax was simply untrue. Obamacare is a tax hike and the biggest one in American history at that.

Naturally, as soon as Bolduan made this error on the air, the whole of CNN went immediately into its previously written “news” that the mandate had been struck down. For seven minutes CNN went with the wrong information causing staffers to groan in embarrassment. 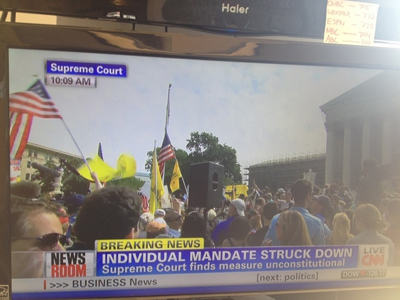 According to insiders, employees of CNN felt the too-quick jump to the wrong reading of the SCOTUS ruling was “shameful.”

“Fu**ing humiliating,” said one CNN veteran. “We had a chance to cover it right. And some people in here don’t get what a big deal getting it wrong is. Morons.”
—–

“It’s outrageous and embarrassing,” a third CNN staffer vented. “Maybe this will shake the company into understanding that CNN has not been the ‘most trusted name in news’ for a very long time.”

Ultimately, just before noon eastern, CNN issued an apology for its error.

In his opinion, Chief Justice Roberts initially said that the individual mandate was not a valid exercise of Congressional power under the Commerce Clause. CNN reported that fact, but then wrongly reported that therefore the court struck down the mandate as unconstitutional. However, that was not the whole of the Court’s ruling. CNN regrets that it didn’t wait to report out the full and complete opinion regarding the mandate. We made a correction within a few minutes and apologize for the error.

The most trusted name in news gets another black eye. No wonder the cabler has seen its worst ratings since 1991.