“Russia is not a friendly character on the world stage and for this president [Obama] to be looking for greater flexibility where he doesn’t have to answer to the American people in his relations with Russia is very, very troubling, very alarming,” he said. “I am very, very concerned.

“This is to Russia,” Romney said. “This is without question our number one geopolitical foe.

“I’m saying in terms of a geopolitical opponent, the nation that lines up with the world’s worst actors, of course the greatest threat that the world faces is a nuclear Iran, and nuclear North Korea is already troubling enough, but when these terrible actors pursue their course in the world and we go to the United Nations looking for ways to stop them, when [Syrian President] Assad, for instance, is murdering his own people, we go to the United Nations and who is it that always stands up for the world’s worst actors?”

Mitt Romney made that statement on March 26, 2012, and he was widely criticized  for it.

Turns out he’s not such the geopolitical neophyte he’s been made out to be. In fact, he looks damn prescient in his observations, considering the ongoing slaughter in Syria.  The most recent example to back up his reasoning comes as Syrian “President” Bashar Assad let loose on Syrian civilians with his riot-control helicopter gunships.

And which country supplied the good dictator with this advanced military aircraft? Hint: Begins with an ‘R’ and ends with ‘ussia’.

This is no anomaly. No matter which nefarious foe of the United States (and the civilized world) may be acting up, Russia, and in many cases, China, are there reflexively blocking our efforts at every turn. Whether supplying arms, blocking sanctions, or supporting the desires of rogue nations to obtain information and material for development of nuclear capabilities, Russia is the one constant behind them all.

They are the world’s devious Lucy to the good natured Charlie Brown, yanking the football away when we try to kick it.

No where is this more apparent then in the tragically incompetent United Nations. Russia is always at the ready to assist any and all of their eager, unbalanced cohorts, flexing their ‘veto power’ to block any meaningful attempt by the U.S. and our allies to attain some kind of leverage over these rotten regimes.

And Obama’s feelings toward Russia? Well, he discussed his tactics a few weeks ago with Russian President Dmitry Medvedev, with assurance that the following hot-mic message would be passed onto his dear friend, Russian puppet-master Vladi­mir Putin:

“On all these issues, but particularly missile defense, this, this can be solved, but it’s important for him [Putin] to give me space,” “This is my last election.”

“After my election, I have more flexibility.”

Such a helpful comrade.

Police, firefighters, and teachers! Oh my!
Let's Try This Again - New Version Of Disqus Is Ready 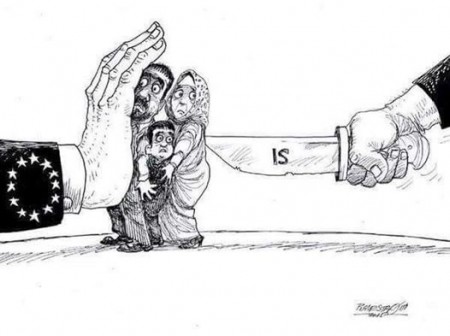