One-time Disney cutie Amanda Bynes was pulled over for drunk driving in Hollyweird this week. What was her reaction to this personal low? She thinks Obama should fire the cop that pulled her over.

As soon as she was arrested, like every mind-numbed Obamaite she took to Twitter to demand that her messiah come to her aide. 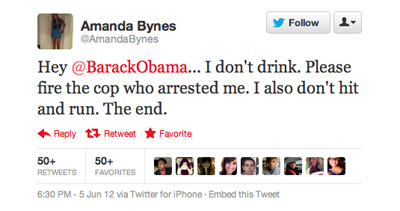 Well, why not? After all, when Obama was immaculated his supporters imagined that their mortgages and rent would be free and he’d give them all sweet, no-show government jobs. Even Saint Obama himself said that the sea levels would fall with his election and his clownish vice president said that cancer would be cured if O won the White House.

This sort of religious-like belief in the omnipotence of a mere president is so entirely un-American. But aside from the cultural rot it evinces, it is also immoral to imagine that a political leader should be so all powerful. Would you want a president that has the power to fire a county sheriff for making a properly legal arrest for drunk driving? Is that really the sort of power that you want a prez to have??

That isn’t democracy, that isn’t American. It is totalitarian. But, that is how the left thinks. They are totalitarians at heart.

Another Preference Cascade: Less than one in three want Obamacare to be upheld.
THUNDER Up!