On yesterday’s Sean Hannity broadcast, Sean interviewed author Edward Klein about his three hour face-to-face interview with Rev. Jeremiah Wright.  Over the weekend, Klein had revealed in the New York Post that after ABC News broadcast the infamous “God Damn America!” video from Trinity UCC, Rev. Wright was contacted by a “very close” friend of then-Senator Barack Obama, who offered him $150,000 to disappear until after the Nov. 2008 presidential election.  This was one of the many startling revelations about the Obama presidency from Klein’s new book, The Amateur.

On yesterday’s program, Klein identified that close friend: Dr. Eric Whitaker, a managing director at the University of Chicago Medical Center.  That’s the same hospital that employed Michelle Obama as Executive Director of Community and External Affairs, then promoted her to Vice President for External Affairs shortly after Barack Obama was elected to the US Senate (with a nearly 3x increase in salary), then eliminated her position after the Obamas moved to Washington, DC.  It’s also the same organization that just received a $5.9 million grant from the Department of Health and Human Services.

Then Klein dropped this bombshell when he discussed what Rev. Wright and Obama talked about during Obama’s “countless” visits to Rev. Wright’s home:

You know, we – all of us – complained about the fact that Obama sat in that church and listened to that hate speech for twenty years, but what we don’t realize is that even before he became a member of that church he was very close to the Rev. Wright, who was like a second father to him, and who was his spiritual advisor, his political advisor, and in fact the Rev. Wright told me on tape that Obama came to him and said, ‘I need some spiritual advice.  I don’t know exactly who I am.’  And the Rev. Wright said – and this is on tape – ‘Well we know your Islam background and you have that, but what you need now is some coaching on Christianity.’

And I asked the Rev. Wright, ‘Did you convert him from being a Muslim to a Christian?’  And he said, ‘Well I don’t know if I could go that far.  But I can tell you that I made it comfortable for him to accept Christianity without having to renounce his Islamic background.’

At this point, before the tapes are released and we actually hear Rev. Wright speaking, this is still third-hand information.  But what a fascinating revelation, which will no doubt prove to be red meat for those who insist that Obama is a closet Muslim.

But what does it really mean?  Perhaps we should take another look at who Barack Obama is.  Ann Althouse has been blogging “Dreams From My Father”; here are links to her first and second posts.  Her journey into the text of this book has left a singular impression on me, which is Obama’s constant insecurity and inner conflict, particularly about the dynamics of race and his own identity.  He was always the person who never fit in: the half-African kid in white American suburbia, or Hawaii, or Indonesia; the secularist Unitarian in a Muslim nation (Indonesia), the half-white kid in the black student clubs in college, and so on.

Obviously Lolo Soetoro saw to it that his step-son Barack Hussein Obama was integrated into the Muslim culture of Indonesia.  The Muslim-oriented schools in Indonesia probably provided Barack Obama with the only rigorous religious instruction he ever received.  But like many other Asian cultures, the Indonesians actually practiced a kind of syncretism, which although primarily Muslim, also included elements of Catholicism, Hinduism, and ancient animist religious traditions.  According to accounts of his time with Obama and his mother, Soetoro was “more of a free spirit than a devout Muslim.”

We also need to figure in the religious faith of Obama’s mother, Stanley Ann Dunham, and of her parents, who raised Obama during many of his formative years.  The Dunham family was not religious and Obama himself described his mother as a secular humanist.  Others described her as an atheist (during her high school years) or an agnostic who also developed her own syncretic worldview made up of snippets from Christianity, Buddhism, Taoism, Hinduism, etc.  But one thing widely agreed upon is that while Dunham did not subscribe strictly to any religious creed, she was an intellectual who had come to accept what she believed by carefully working through various religious doctrines, aided by her own personal experiences and reasoning.

It’s reasonable to assume, then, that young Barack Obama’s understanding of “religion” was very similar to that of his mother – a syncretic set of beliefs and morality rooted in what had been determined to be the best teachings from numerous cultures. There is no evidence at all to suggest that young Obama was ever serious about Islam, or that he was ever a strict follower of any single religion.

His syncretic worldview probably made him an intellectual superstar at Columbia and Harvard, but when Obama found himself in inner-city Chicago, trying to identify with traditional American black culture and its religious roots — which he knew virtually nothing about — he once again found himself an outsider trying to fit in.  That’s when he went knocking on Rev. Wright’s door.

I would guess that Rev. Wright understood that Obama was desperately trying to understand how the Black Christian church had integrated itself so deeply into black culture.  But he also recognized that Obama would not be able to understand Christianity unless Wright taught it to him in a way that was based on a scholarly footing.   Therefore, Wright chose to teach the Christian faith to Obama by building it on the principles of critical race theory and black liberation theology.  Since Obama was already an accomplished student of Derrick Bell at Harvard, I believe that Wright’s education of Obama was successful.  And Wright was arguably proud of the fact that he handled it by edifying and enriching Obama’s existing worldview (including its Muslim elements) rather than dismantling it.

To me, this story simply drives home the fact that the way Obama understands and experiences his religious faith is very far out of the mainstream of most Americans who were raised in a traditional Catholic, mainline Protestant, or Evangelical home.  And Evangelicals, particularly, will be disturbed by the fact that neither Wright or Obama seem to share their deeply held conviction that Christianity alone contains the truths necessary for salvation.

I seriously doubt that Barack Obama is “closet Muslim” who secretly prays facing Mecca every day and feels some sort of spiritual kinship with Mahmoud Ahmadinejad or the Muslim Brotherhood.  But his understanding of how religion, race, and politics fit together is far out of the American mainstream, which is something we should definitely consider come election day. 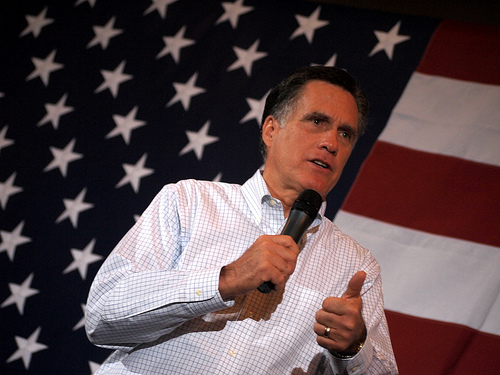