When Barack Obama first won the White House, gun sales soared because supporters of the Constitution rightfully understood that Barack Obama is a gun-banner at heart. They feared he’d attack their Constitutional rights and begin a long trail of legislation or regulatory efforts to ban guns.

Everyone has been surprised — including Obama’s own supporters — that he has not done anything to advance the anti-gun issue. Even going so far as to line up in favor of some gun issues (such as allowing guns in national parks).

In fact, looking back through recent political history shows that Democrats have practically given up pushing their gun-banning ideas on the electorate. Proof of this is the fact that every state but one (Illinois) now has some sort of shall issue law on the books, Democrats having given up fighting to stop it all.

This leads Salon’s Steve Kornacki to wonder why conservatives, gun owners, and the National Rifle Association (NRA) still peddle the fear that Obama will come after our guns.

Certainly, this reflects the pattern that has defined much of the conservative opposition to Obama’s presidency. He’s governed as a middle-of-the-road incrementalist, but the right decided before he took office that Obama was a leftist radical, so that’s how they’ll treat him. He could get reelected and sit on this hands for four more years and Obama will still be a gun confiscator to the 2nd Amendment crowd.

Recently Mitt Romney, the presumptive GOP nominee for the Presidency, warned the NRA that a second Obama term would see him “unrestrained” from attacking our Second Amendment rights.

“In a second term, he would be unrestrained by the demands of reelection,” Romney told a crowd estimated at 6,000 in the cavernous Edward Jones Dome in St. Louis. “As he told the Russian president last month when he thought no one else was listening, after a reelection he’ll have a lot more, quote, ‘flexibility’ to do what he wants. I’m not exactly sure what he meant by that, but looking at his first three years, I have a very good idea.”

Kornacki laughs at the presumption that Romney, a former Governor that was an anti-gun guy himself, would be able to successfully pull off the role of protector of the Second Amendment. I happen to agree with Kornacki on that. Romney is no bastion of our rights.

But Romney is also right that Barack Obama would have no reason at all to put off his zeal for gun-banning should he win a second term. And we know that Obama is, at heart, a hater of our Constitutional rights. He said so and voted so many times as an Illinois State Senator, after all.

As to Romney, he will be far more likely to be influenced by conservatives to continue a Second Amendment-friendly policy and therefore he is the one to vote for over Obama, a man that stands foursquare against our rights quite despite that he never focused on it in his first term.

It is better to roll the dice with a shaky Romney than continue with a sure bet, anti-Second Amendment Obama quite despite what he has or has not done in his first term.

It’s just a matter of odds. 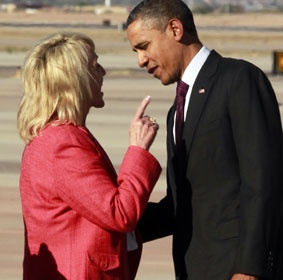