When it broke, the Old Media was all over Mike Daisey’s story of the horrid working conditions at Apple Computer’s foreign manufacturing plants. The story had oppressed workers, pathos, and best of all, eeevil corporate greed. Daisey was well on the road to making Apple the liberal’s newest bete noire and was being hailed as the next Upton Sinclair. Until, that is, it became clear that he made it all up. 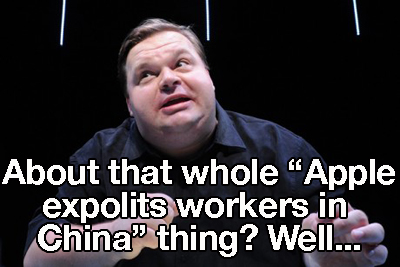 One of the first major media outlets to push Daisey’s anti-Apple claims was the program This American Life aired on the venerable Public Radio station WBEZ. The program featured Daisey’s claims in a January episode, but has now been faced with the “difficult news,” as representatives of the show have said, of Daisey’s fabrication.

“We’re horrified to have let something like this onto public radio,” the producers of This American Life wrote in a March 16 posting on their website.

Chicago Public Radio’s apologies are for airing claims made by actor and monologist Daisey whose one-man show accuses Apple of dangerous and exploitative working conditions at the Foxconn factory in China where parts of Apple products are made. One of Daisey’s tales featured a Chinese worker whose hands had supposedly become gnarled with arthritis from assembling Apple iPads. He said that the man had only seen iPad parts and never seen an operating iPad. When Daisey turned his on, the abused worker said it was “like magic.”

A very emotional tale, that. If only it were true.

Certainly it’s good and proper that CPR has apologized for jumping on this story without first verifying Daisey’s shocking claims. But CPR* isn’t the only outlet that loved this story. CNN, CBS, MSNBC and others were also all over this tale of corporate greed gone wild. So far, though, no apologies from these TV networks.

The folks at TVNewser make an excellent point about this situation. Noting that TV Newsers rarely apologize for what turns out to be the lies in their reports, the Networks won’t have much excuse for just moving on and ignoring this mess like they usually do.

… Daisey’s report was not breaking news, so the regular reaction that “news is fluid” won’t fly. It would have been possible for reporters at these outlets to look into the claims, but they didn’t.

So, how did Daisey get caught in his prevarications?

At the end of February, ABC’s Nightline was invited to the Foxconn factory to see how iPads, iPhones, and other Apple products are assembled. In the end, anchor Bill Weir could not substantiate Daisey’s accusations of horrid working conditions at Foxconn.

In fact, Weir found workers telling him that conditions were very good at Foxconn, especially when compared to many other factories in China.

After this report, it all started to break down for “actor” Mike Daisey. Almost immediately his one-man shows were cancelled in Chicago, the next city he was supposed to play to. Yet even with his fabrications exposed, amazingly Daisey still says he stands by his work.

“What I do is not journalism. The tools of the theater are not the same as the tools of journalism,” he avers. Unfortunately for his reputation, he never presented his story as “theater,” but instead presented it as truth. And the media loved him for it.

So, will CNN, MSNBC, and CBS apologize for regurgitating Daisey’s “theatrics” and presenting it as truth? I don’t suggest you hold your breath for it.

Dear Conservatives: Romney Isn't One of Us But We Still Hold The Power If…
Why are the deaths of these black men being ignored?(UPDATED)