Home
Categories
Calm Opposition to the Storm of Climate Change

This past week Dr. Richard Lindzen spoke before the House of Commons on the issue of global warming.  Lindzen is a professor at MIT in the Departement of Earth, Atmospheric and Planetary Sciences.  He’s long had a history of arguing against the purported catastrophic effects of global warming.  As such, whether people support or deride him sadly comes down to their political beliefs.  That is not how it should be with science but that is a topic for another post.

The beginning of his speech is getting the most press (H/T: Ann Althouse):

Stated briefly, I will simply try to clarify what the debate over climate change is really about. It most certainly is not about whether climate is changing: it always is. It is not about whether CO2 is increasing: it clearly is. It is not about whether the increase in CO2, by itself, will lead to some warming: it should. The debate is simply over the matter of how much warming the increase in CO2 can lead to, and the connection of such warming to the innumerable claimed catastrophes. The evidence is that the increase in CO2 will lead to very little warming, and that the connection of this minimal warming (or even significant warming) to the purported catastrophes is also minimal. The arguments on which the catastrophic claims are made are extremely weak – and commonly acknowledged as such. They are sometimes overtly dishonest.

What is more interesting to me as a scientist is the link to the pdf with the full content of the speech.  I can’t link to individual pages of the pdf, so let me highlight a few areas I found worthy of note.  Lindzen notes comments in an open letter from climate scientists who appeared to be banding together to say that the science of climate change is settled.  He focuses two statements:

(iii) Natural causes always play a role in changing Earth’s climate, but are now being overwhelmed by human-induced changes.

(iv) Warming the planet will cause many other climatic patterns to change at speeds unprecedented in modern times, including increasing rates of sea-level rise and alterations in the hydrologic cycle.

Now, one of the signers was Carl Wunsch. Here is what he says in a recent paper in Journal of Climate (Wunsch et al, 2007) (and repeated a couple of weeks ago in a departmental lecture):

“It remains possible that the data base is insufficient to compute mean sea level trends with the accuracy necessary to discuss the impact of global warming–as disappointing as this conclusion may be.”

In brief, when we actually go to the scientific literature we see that the ‘authoritative’ assertions are no more credible than the pathetic picture of the polar bear that accompanied the letter.

Lindzen also challenges the assertion that the “science is settled” in other ways.  He does it both by stating the obvious–by definition science is never settled, there is always room for more thought and investigations–and by challenging commonly held truisms about global warming.  I particularly liked this example: I don’t blame people, in general, for having been duped by the global warming hysteria.  It’s based on some accurate facts.  It involves math and scientific models that take a lifetime to understand.  It invokes passionate imagery such as slowly dying polar bears.  And a lot of scientists–from a profession where truth is suppose to be held in high regard–violated public trust and deceived many in the name of money or political agendas.  This goes for politicians, too, who have previously made statements showing a “belief” of global warming.  Politicians can’t possibly be experts in all subjects.  They rely heavily on advisers and experts to summarize issues.  When many of these so-called-experts are actively being dishonest the results are inevitable.

Thankfully it would seem the tide is finally turning on climate change hysteria.  That really is the key point, the hysteria.  Climate change itself is an interesting branch of atmospheric science.  Improving models and data gathering techniques are valid scientific pursuits.  But extrapolation to the certain doom of all life on earth in the next ten years was hyperbole never based in science.  At least the public consciousness is beginning to realize that.

VIDEO: Brian K. Hill for U.S. Senate From Connecticut
A Word From The Boss 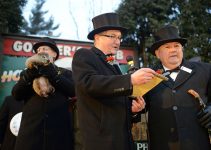