I come at this issue as a liberal and a Democrat and as someone who, until yesterday, generally supported the President, as someone who saw in his vision of America a greater concern for each other, a less mean-spirited culture, someone who could, and did, remind the nation that we are our brothers’ keeper, that liberalism has a long vocation in this country of promoting freedom and protecting the interests of the average person against the combined power of the rich, and that we should learn how to disagree without being disagreeable. I defended the University of Notre Dame for honoring this man, and my heart was warmed when President Obama said at Notre Dame: “we must find a way to reconcile our ever-shrinking world with its ever-growing diversity — diversity of thought, diversity of culture, and diversity of belief. In short, we must find a way to live together as one human family.”

To borrow from Emile Zola: J’Accuse!

I accuse you, Mr. President, of dishonoring your own vision by this shameful decision.

I accuse you, Mr. President, of failing to live out the respect for diversity that you so properly and beautifully proclaimed as a cardinal virtue at Notre Dame. Or, are we to believe that diversity is only to be lauded when it advances the interests of those with whom we agree? That’s not diversity. That’s misuse of a noble principle for ignoble ends.

I accuse you, Mr. President, of betraying philosophic liberalism, which began, lest we forget, as a defense of the rights of conscience. As Catholics, we need to be honest and admit that, three hundred years ago, the defense of conscience was not high on the agenda of Holy Mother Church. But, we Catholics learned to embrace the idea that the coercion of conscience is a violation of human dignity. This is a lesson, Mr. President, that you and too many of your fellow liberals have apparently unlearned.

I accuse you, Mr. President, who argued that your experience as a constitutional scholar commended you for the high office you hold, of ignoring the Constitution. Perhaps you were busy last week, but the Supreme Court, on a 9-0 vote, said that the First Amendment still means something and that it trumps even desirable governmental objectives when the two come into conflict. Did you miss the concurring opinion, joined by your own most recent appointment to the court, Justice Kagan, which stated:

“Throughout our Nation’s history, religious bodies have been the preeminent example of private associations that have ‘act[ed] as critical buffers between the individual and the power of the State.’ Roberts v. United States Jaycees, 468 U.S. 609, 619 (1984). In a case like the one now before us—where the goal of the civil law in question, the elimination of discrimination against persons with disabilities, is so worthy—it is easy to forget that the autonomy of religious groups, both here in the United States and abroad, has often served as a shield against oppressive civil laws. To safeguard this crucial autonomy, we have long recognized that the Religion Clauses protect a private sphere within which religious bodies are free to govern themselves in accordance with their own beliefs. The Constitution guarantees religious bodies ‘independence from secular control or manipulation—in short, power to decide for themselves, free from state interference, matters of church government as well as those of faith and doctrine.’ Kedroff v. Saint Nicholas Cathedral of Russian Orthodox Church in North America, 344 U.S. 94, 116 (1952).”

Pray, do tell, Mr. President, what part of that paragraph did you consider when making this decision? Or, do you like having your Justice Department having its hat handed to it at the Supreme Court?

I accuse you, Mr. President, as leader of the Democratic Party, the primary vehicle for historic political liberalism in this country, of risking all the many achievements of political liberalism, from environmental protection to Social Security to Medicare and Medicaid, by committing a politically stupid act. Do you really think your friends at Planned Parenthood and NARAL were going to support the candidacy of Mr. Romney or Mr. Gingrich? How does this decision affect the prospects of Democrats winning back the House in districts like Pennsylvania’s Third or Ohio’s First or Virginia’s Fifth districts? How do your chances look today among Catholic swing voters in Scranton and the suburbs of Cincinnati and along the I-4 corridor in Florida? I suppose that there are campaign contributions to consider, but really, sacrificing one’s conscience, or the conscience rights of others, was not worth Wales, was it worth a few extra dollars in your campaign coffers?

I accuse you, Mr. President, of failing to know your history. In 1978, the IRS proposed a rule change affecting the tax exempt status of private Christian schools. The rule would change the way school verified their desegregation policies, putting the burden of proof on the school, not the IRS. By 1978, many of those schools were already desegregated, even though they had first been founded as a means to avoid desegregation of the public schools. But evangelical Christians did not look kindly on the government’s interference in schools they had built themselves and, even though the IRS rescinded the rule change, the original decision was the straw the broke the camel’s back for those who wished to separate themselves from mainstream culture. They formed the Moral Majority, entered that mainstream culture, and helped the Republican Party win the next three presidential elections. You, Mr. President, have struck that same nerve. Catholics built their colleges and universities and hospitals. They did so out of religious conviction and, as often as not, because mainstream institutions did not welcome Catholics. It is one thing to support a policy with which the Catholic Church disagrees but it is quite another to start telling Catholics how to run their own institutions.

Mr. Winters, though I appreciate your coming to your senses now, I wonder where you’ve been.

I accuse you Mr. Winters of never really checking into this candidate in the first place.

I accuse you Mr. Winters of being someone likely focused more on Obama’s skin color than the content of his character or his history as a radical.

I accuse you Mr. Winters of being bamboozled by Obama and his willing accomplices in the media.

I accuse you Mr. Winters of coming to the Obama-is-no-where-near-the-man-we were-told-he-was party way too late.

I accuse you Mr. Winters, and those who were (and still are) as gullible, of putting Obama in a position that allows him to step on Catholic conscience.

Perhaps before you vote again Mr. Winters, in any election, you would look beyond the shallowness that led to your past support of Obama and to your own conscience, that which Obama today desires to crush.

You Mr. Winters, and people like you, brought us to this point. 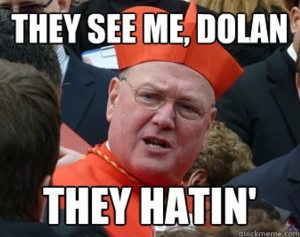