Home
#Occupy
Occupy Wall Street Stealing From The Poor to Give to Themselves!

It is more common everyday. A man buys a house, the market collapses and suddenly his house is worth less than the mortgage, then he loses his job until, as a single father, he finds himself in foreclosure with no place to raise his two preteen daughters. It’s a case made for the Occupy Wall Street movement to swoop in and right wrongs, right? Maybe not because the OWSers in New York stole this poor guy’s home away from him in order to give it to one of their own members. Confused? Read on.

A Brooklyn man living in an apartment with his two daughters was alerted to the fact that his in-foreclosure-home had been broken into and occupied by Occupiers, as in Occupy Wall Street activists. When he rushed to his home he found a group of strangers that had broken into his home claiming to have “reclaimed” the house and given it to another family.

“They’re trying to take a house and say the bank is robbing the people because the mortgage is too high — so contact the owner!” fumed Wise Ahadzi, 28, who owns the home at 702 Vermont St. in East New York.

Apparently Ahadzi had bought the house in 2007 for the princely sum of $424,500 but during the housing bubble of 2009 the house ended up being worth only half that. Then, when he lost his job and got behind on the mortgage, the bank foreclosed on the property.

Enter — illegally, mind you — Occupy Wall Streeters who discovered the home in foreclosure and decided that they’d steal it away from “the bank” with the ostensible goal of helping the needy.

Ahadzi is rightfully indignant that they didn’t contact him so that they could help him retake possession of his own house. Ahadzi also asked why they didn’t try to help him and his two daughters to which the Occupiers claimed he “didn’t qualify” because he wasn’t in their group. “Why can’t you fight for me?,” he wondered.

So, who did they want to “give” the house to? An organizer for VOCAL-NY — a gay rights activist group. A fellow with a job and one that belongs to their own group, yet.

Worse, when Ahadzi got to his home he discovered that the Occupiers had taken all his personal belongings and shoved them in a pile in the basement and then began to tear out walls and “remodel” the place, spending, they claimed, over $9,000 in the effort.

This isn’t a lone incident, either. It is apparently an idea that the OWSers are going to try and push nation-wide. At a recent Chicago OWS rally, for instance, a purported Lutheran pastor preached an OWS sermon urging OWSers to do the same thing in the Windy City.

John Ruberry attended the speech and notes that Reverend Tom Gaulke told those assembled that they were going to repeat the New York efforts.

“We will be supporting a homeless family in reoccupying a vacant house,” the reverend claimed.

As Ruberry notes, this is called trespassing.

So, what have we learned form this? We’ve learned that OWS is not altruistic in anything they do even as they claim the mantle of Mother Theresa — well, Mother Theresa if she engaged in rapes, drug abuse, deaths, racism, anti-Semitism, property destruction and general lawlessness, anyway.

We’ve learned that, like any self-interested Wall Street Banker, the OWSers only want to enrich themselves and help their own members. They aren’t really interested in helping defend the poor and downtrodden. Just helping themselves. 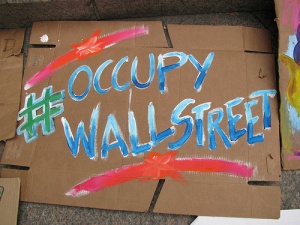