The November 11th edition of the Weekend Caption Contest™ was another rousing success that I somehow managed to fail to announce winners for. With a new edition of the caption contest coming later this morning it was time to play a little catch up… The assignment last week was to caption the following picture: 5) (OTIS the hand) – “Michelle rips America’s heart out and dangles it before our eyes.”

6 tie) (David Robertson) – “In Mother Russia, you do not float balloon. Balloon floats you.”

The Readers Choice Award (for the second week in a row) goes to:

That’s all for last week. A new edition of the contest will debut in a few hours. 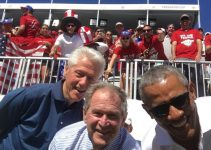