Home
Occupy Protest
Isn’t it past time for Obama to back off his support of the Occupy movement? (UPDATED)

Especially when you see and hear with your own words what is seen and heard in this video coming our way via Powerline.  Be warned, the language is pretty much what we’ve come to expect from these yahoos:

Enough is enough. These people are using children as human shields, they’re knocking little old ladies to the ground and much, much more as attested to in this Big Government piece which as of this writing is listing over 150 separate incidents across the country.

President Obama… when will you rescind your support of this movement?

UPDATE: Charlie at AnotherThink weighs in with a related piece:

All this careless rhetoric against the wealthy has elevated envy to a virtue. The Occupy Wall Street movement is rooted in envy, one of the deadliest of human sins. After all, the goal of OWS, and the deranged children it has spawned in Oakland, DC and elsewhere, is to tear down capitalism (a greed-based system) and remake society around an envy based system instead. These young idealists and anarchists imagine a society where everyone gets a piece of what everybody else has, where no one will ever be allowed to stand higher than the next guy.

Capitalism succeeds because it allows someone with good ideas and a strong work ethic to rise above the average. It appeals to the competitive desire in most of us to improve, to do better.

By comparison, OWS-style egalitarianism can only succeed if we all agree to pull down those high achievers and make certain that everyone is merely average.

In that, the OWS movement shares an alarming amount of DNA with the French Revolution, and is attempting to live out its high-sounding creed in the streets: Liberty, Equality and Fraternity.

How long will it be before they start lopping off the heads of the wealthy in Zuccotti Park?

Charlie’s got more.  Read it and be wiser. 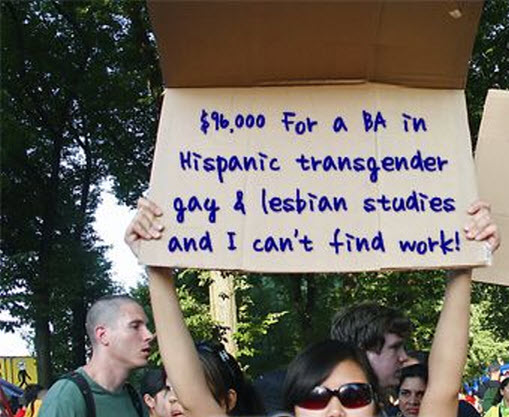