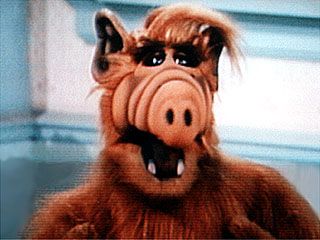 Awhile back I reported that I took a job that resulted in me working with a woman with an apple fetish.

Well, one day during a work break I told her that I wondered what would happen if an Earth scientist encountered a scientist from another planet. The woman grinned and said, “I know of a film that features such a scenario, and it’s being shown tonight. Want to see it?”

I said that I did, and so I arranged to meet the woman at the site of the film. Little did I know what I was in for.

The first clue that something was amiss was the sight of my co-worker wearing a hat that looked like this:

She also wore a top similar to this:

I asked her if she had brought her apples with her.  She said that she hadn’t but that she had a couple of melons instead.  “Oh,” I replied. “Are they ripe yet?”

and asked, “What planet did you say you were from?” “Melmac,” I replied, “Why do you ask?”

Anyway, we went inside the building, at which time we were surrounded by people who looked as if they had just arrived from some other planet.  I asked one of them, “Is the Alien Task Force looking for you, too?”  The person looked at me like this:

Why people keep asking me that question I do not know.

Well, the film finally started.  As I expected, it was an educational film. To my surprise, the film featuring a dance lesson. Eventually the film reached the part at which the first scientist revealed his latest discovery: I figured out that the first scientist was not of Earth origin, which was a bit of a relief for me, because it frightened me to think that an Earth university would produce such a graduate. It’s bad enough that Earth universities produced the “Occupy Wall Street” protesters. I asked my co-worker if she thought that they could also be from another planet.

and said, “You really are dopey.” Then she left.

I never did get to sample her melons.

There is still much about Planet Earth that I do not understand.

At least I know more about Earth than these aliens: 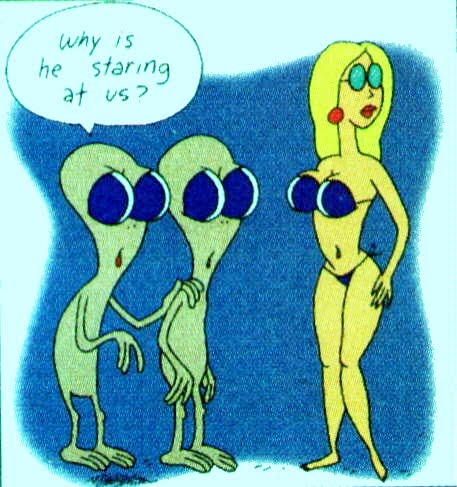 A Good Move For The Palestinians?
The Politico of personal destruction