Obama pulled the plug on part Obamacare because it was ‘unworkable.  And that’s how the AP reported it. That was until Drudge picked it up and they did a bit of editing to blame it on Republicans somehow. The original read like this:

The Obama administration says it is unable to go forward with a major new program in the president’s signature health care overhaul law. Officials said Friday a new long-term care insurance program has critical design flaws that could not be fixed to make it financially self-sustaining.
Health and Human Services Secretary Kathleen Sebelius said in a letter to Congress she does not see a viable path forward at this time.

The CLASS program was supposed to be a voluntary insurance plan for working adults regardless of age or health. Workers would pay an affordable monthly premium during their careers, and could collect a modest daily cash benefit if they became disabled later in life.

But after Drudge picked it up and it got his usual avalanche of traffic, the AP changed the story just a wee bit:

The program, expected to launch in 2012, had been dogged from the beginning by doubts over its financial solvency.

Proponents, including many groups that fought to pass the health care law, have vowed a vigorous effort to rescue the program, insisting that Congress gave the administration broad authority to make changes. Long-term care includes not only nursing homes, but such services as home health aides for disabled people.

“This is a victory for the American taxpayer and future generations,” said Sen. John Thune, R-S.D., spearheading opposition in the Senate.

Let’s be perfectly clear. This had nothing to do with Republicans. This was the result of the Nancy Pelosi doctrine of passing the bill so we can see what is in it.

Yet the AP descibes the program as a “casualty” of a “relentless assault” from Republicans.   Lost on the AP is the fact this was one of the main reasons Republicans (ahem and Independents) overwhelmingly rejected the bill, because it was a grand social experiment the authors of which had NO CLUE how it would work.

And then when it crumbles the reliable liberal media rushes in the blame Republicans for Obama’s failure. Nice.

Your brain on OWS
A Stretch Too Far 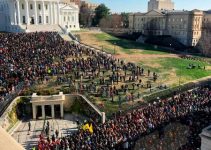