Sarah Palin reacts to recent events… and in my view, connects:

So, now these union bosses are desperately trying to cast the grassroots Tea Party Movement as being “against the workingman.” How outrageously wrong this unapologetic Jim Hoffa is, for the people’s movement is the real movement for working class men and women. It’s rooted in real solidarity, and not special interests and corporate kickbacks. It represents the needed reform that will empower workers and job creators. We stand with the little guy against the corruption and influence peddling of those who collude to grease the wheels of government power.

This collusion is at the heart of Obama’s economic vision for America. In practice it is socialism for the very rich and the very poor, but a brutal form of capitalism for the rest of us. It is socialism for the very poor who are reduced to a degrading perpetual dependence on a near-bankrupt centralized government to provide their every need, while at the same time robbing them of that which brings fulfillment and success – the life-affirming pride that comes from taking responsibility for your own destiny and building a better life through self-initiative and work ethic. And Obama’s vision is socialism via crony capitalism for the very rich who continue to get bailouts, debt-ridden “stimulus” funds, and special favors that allow them to waive off or help draft the burdensome regulations that act as a boot on the neck to small business owners who don’t have the same friends in high places. And where does this collusion leave working class Americans and the small business owners who create 70% of the jobs in this country? Out in the cold. It’s you and your children who are left paying for the cronyism of Obama and our permanent political class in DC.

Ask yourself if the folks you heard demonize concerned, independent Americans yesterday really speak for the working class when they’re all too happy to burden your families with the bill to bail out the President’s friends on Wall Street.

We should not forget that for all his lofty rhetoric, President Obama is a Chicago politician. Graft, cronyism, and quid pro quo are the well-known methods of an infamous Chicago political machine, of which Barack Obama emerged. This corruption isn’t just the result of a few bad apples. It’s the nature of a skewed system that’s typical of one not allowing a level playing field. If one desires opportunity for all, then the only solution is sudden and relentless reform. I know of what I speak. I too served in public office in a state that had a corruption problem. The difference is that I fought the corrupt political machine. Barack Obama used the machine in his state to advance. He never challenged it. And he’s evidently brought the same Chicago “pay-to-play” practices to the White House.

Read the whole thing… contrast her words with any words from this President… for sincerity, for passion, for genuineness…

"If you don't agree [with Obama], you're against rebuilding America"
Not Going Postal Just Yet
Tags:Jimmy Hoffa Jr., Sarah Palin 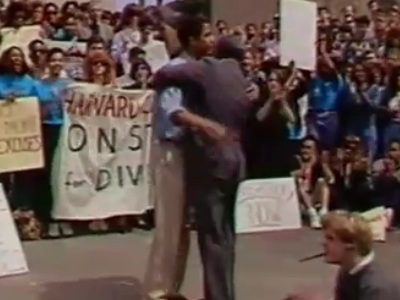