It’s all race all the time this weekend at Wizbang.  I’m bringing the trifecta into play today with a doozy that dovetails in with yesterday’s effort on how the left hates them some poor black folks in Africa.  This is delicious.  The DC reports Al Gore recently equated any debate over climate change to the marginalization of racists following during the Civil Rights struggles of the ’60s.

Gore explained that in order for climate change alarmists to succeed, they must “win the conversation” against those who deny there is a crisis.

“I remember, again going back to my early years in the South, when the Civil Rights revolution was unfolding, there were two things that really made an impression on me,” Gore said. “My generation watched Bull Connor turning the hose on civil rights demonstrators and we went, ‘Whoa! How gross and evil is that?’ My generation asked old people, ‘Explain to me again why it is okay to discriminate against people because their skin color is different?’ And when they couldn’t really answer that question with integrity, the change really started.”

The former vice president recalled how society succeeded in marginalizing racists and said climate change skeptics must be defeated in the same manner.

“We have to win the conversation on climate,” Gore added.

Up to now I’d never thought of a conversation as something that can be won or lost.  Win or lose seems more like a debate.  Although in a debate you would listen to and rebut your opponents’ points.  Argument would probably be the right word for “win or lose through browbeating without respect to logic or reason or fact.”

Argument is the foundation upon which most of my lunatic rantings are formulated.

So on the one hand is me calling environmentalists racists because their preferred solutions to any perceived eco-threat is placing limits on human consumption.  Then there’s Al Gore saying those who don’t accept climate change science are pretty much training their dobermans and fire hoses at Rosa Parks on the Fourth of July while she’s visiting the Tomb of the Unknown Soldier.

Neither of us, probably, although my view is more reasonable than his.  Do I think climate change alarmism is a bunch of hooey?  Absolutely.  Climate changes.  There aren’t many plateaus in the Earth’s climate history.  Better to be on an upswing than down.

Maybe we are causing it.  Is mankind going to go back to subsistence agriculture any time soon?  No.  Poor folks want the same stuff we’ve got and Americans aren’t ready to start rooting around in rice paddies nine hours a day.  The best way to adapt is to be wealthy.  If we want to help the poor we should help them be obese like us.

Saying the science is settled or science has spoken is bullshit anyway.  All we can say for sure about climate science is we’ve got some hypotheses that work in theory but don’t closely match observational evidence.  Unfortunately the only way to validate what we think we know is to try to tear those ideas down – to look at as many factors as possible – and see if they stand up to scientific scrutiny.

The Theory of Relativity is pretty well accepted by the scientific community.  There are still people out there trying to prove it wrong.  All it takes is one man to overturn a century of scientific dogma.

Gore also took shots at Texas Gov. Rick Perry, who has lambasted climate change alarmists on the presidential campaign trail, and other politicians who dare to question the veracity of global warming science.

“This is an organized effort to attack the reputation of the scientific community as a whole, to attack their integrity, and to slander them with the lie that they are making up the science in order to make money,” Gore said.

What’s truly daffy is believing that scientists are immune from the politics and greed and cliques and jealousy and petty squabbles that permeate non-scientists’ lives.  How does a scientist react when someone publishes new research that repudiates the work he’s done for twenty years?

If that was my baby I’d slap the diaper on his head and teach him to walk on his hands.  Wanna go have lunch?

Science and scientists can offer us facts and data, but which course of action we choose is up to us.  That’s where the real disagreement lies.  Al and I are two peas in a pod when it comes to bombast, only mine is mostly shtick to drive traffic and Al has truly gone mad.

He might argue that my desire to see a new ice age just for the schadenfreude is madness but he’d be wrong.

President Obama was once asked if he was a flake...
What, me a racist?
Tags:rubber and glue, Wolf! 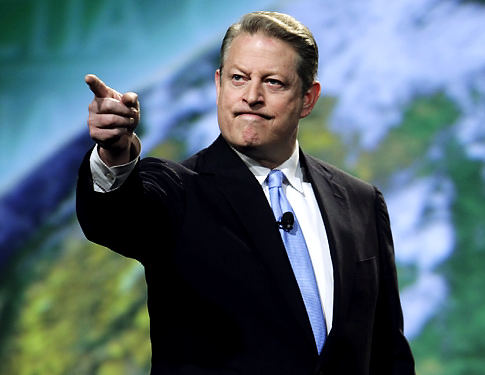