Back in December of 2010 we discovered that Columbia Professor (and HuffPo contributor) David Epstein was arrested and charged with felony incest.

Robert Stacey McCain brings us up to date:

You will recall that Palin-hating blogger David Epstein was arrested in December and charged with felony incest for having sex with his adult daughter (now 24) from 2006 through 2009.

One of our readers has obtained court documents (for Case
#2010NY090162) indicating that Epstein copped a plea to a misdemeanor
charge of attempted incest. (Click the image to enlarge). 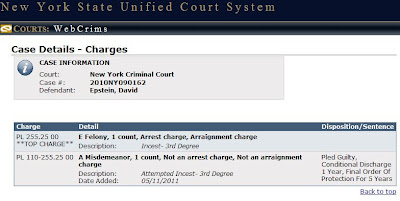 That ruling was on May 11 — two weeks ago — and yet I can find no
news reports about Epstein’s conviction. You might think that at least
the New York Times would find the disposition of this case newsworthy.

I would certainly expect this to qualify as news.  I would further expect Columbia University to be aware of the conviction, and to take appropriate steps to defend the University’s reputation.  Unless of course Columbia finds the practice of incest is a valuable attribute amongst their faculty.

The alert reader who informed me of this previously unreported news
also passed along the court documents to some members of the Columbia
University faculty, resulting in this angry e-mail from Epstein’s
lawyer:

Mr. [Redacted], I am an attorney and I represent Dr. Epstein. Please
be advised that he does not wish to receive any further communications
from you ever again. I have already alerted the District Attorney’s
Office to the emails you have sent him thus far, and should you ever
contact him or me again, we will make the appropriate criminal complaint
to law enforcement.

Well, facts are facts and if Professor Epstein has now pleaded guilty, the presumption of innocence is over. Epstein is still listed as a faculty member on the Columbia University Web site.

Is Epstein’s behavior something that the university tolerates or approves?

Since the LSM are once again delinquent in their reportorial duties in that they are not covering this and are not asking the hard questions, it seems incumbent upon the dextrosphere to contact the worthies mentioned in McCain’s blog posting to ensure they are indeed aware of the facts and enquire as to what they intend to do about their incestuous faculty member.