U.S. Attorney Preet Bharara said the verdict sends a message that white collar laws apply to everyone, “no matter how much money you have.”
Or, apparently, who benefits from your political donations.

According to Open Secrets, Mr. Rajaratnam liked to donate to democrat politicians. 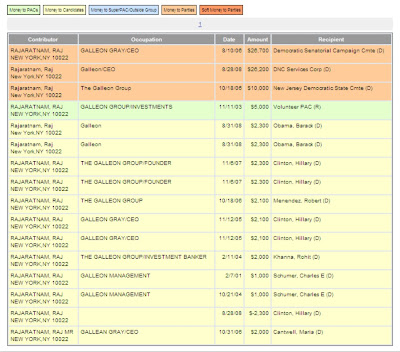 Out of the $87,100 total that Rajaratnam donated to politicians or political committees, $83,100 went to democrats.

The Democratic Senatorial Campaign Committee and something called the DNC Services Corp. were by far the largest benefactors, banking in a total of $52,900 between them during 2006-08.

The most favored individual politician of  Mr. Rajaratnam’s largess?  Hillary Clinton, depositing $11,100 during her time as the democrat Senator from NY.  Let’s hope Mrs. Clinton will return this ill gotten gain as she did with the nearly $800,000 she received from Democratic fundraiser Norman Hsu. He was arrested & convicted of violating campaign finance laws back in 2009.

Plus, arch swindler and convicted con man (now deceased) Bernie Madoff also liked to donate big to democrat politicians. Sen. Charles Schumer(D-NY) was blessed with over $29,000 from Madoff. Further down on Madoff’s list was Sen. Hillary Clinton (D-NY) who received $9,000 for her Senate and failed presidential campaigns. Some of that tainted money was donated to charities.