For the past few weeks, I’ve been quietly ignoring Donald Trump and his teasing of a presidential bid, hoping he’d just go away. He’s been an embarrassment in many ways, his pushing of the “birther” BS is merely the biggest. His own history — financial and political — show just how unfit he is for the office. He’s been a significant supporter of Democrats, and he’s probably the only guy who could lose money running a casino.

But now I’m starting to reconsider.

No, I still think he would be a ruinous president. But I find myself hoping he’ll stick around a bit longer, keep shooting his mouth off, continue being a pain-in-the-ass publicity whore he’s so fantastic at being.

Right now, we have zero declared Republican candidates. That’s not really a problem — the first primary (that would be ours, here in New Hampshire) isn’t until January, so there’s still plenty of time for legitimate candidates to get into the race. But politics and media abhor a vacuum, and the absence of an official rival to Obama has the media running around potential candidates, treating them as if they’ve officially declared.

But now, with Trump, they have someone they can pay attention to. And Trump is reveling in it.

So he’s out there, he’s firing off in all directions, saying whatever pops into his mind, and not giving a damn about the consequences. He’s gone full-force into the “birther” issue, giving those nutjobs someone to rally behind — and leaving the rest of us alone for a change instead of evangelizing us to join their quixotic crusade. And it’s kind of fun to watch Obama and his lickspittles have to actually take them on for a change, instead of just using the birthers to smear all Obama critics.

Economically, Trump just might be the best qualified to run things. As a nation, we’re seriously in hock and quite possibly on the verge of bankruptcy. And while that’s scary to most of us, to Trump it’s old hat — I’ve lost track how many times he’s taken one of his companies through bankruptcy. And our biggest creditor is China, so Obama’s experience in screwing over his creditors could come in handy.

We, as a society, are becoming more and more of a “reality TV” world. And Trump’s a master of that genre.

Right now, Trump is serving a very, very valuable role. He’s a “lightning rod.” (And if you look at his hair, that might not just be figurative, but literal.) He’s drawing the fire of the left, and he’s shooting back.

Sooner or later, Trump will flame out. He will reach the point where the race isn’t entertaining any more, where it will demand more of his time and attention than he’s willing to take away from his other interests, where it will actually start costing him more money and more opportunities than he’s willing to invest. At that point, he will call an end to his “campaign” — and, if his past actions are any indicator, he’ll go out with a bang — possibly even an “kamikaze” move that inflicts one final blow on Obama.

So I say, why not? Why not let him have his fun? The only real harm he’s causing is to those who need to be harmed politically, he’s keeping the Birther nuts busy and not bothering the rest of us, and he’s giving Obama and his lackeys fits.

So more power to him.

"Let me finish my answers the next time we do an interview all right?"
Can you measure a movement by its followers? 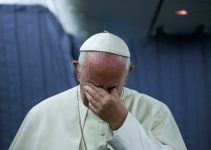