This week’s Weekend Caption Contest™ was another big hit. Guido scored a rare first and second place finish, but I couldn’t deceide between the final two captions so I just gave them the tie. Anyway, the assignment this week was to caption the following picture: 1) (guido) – “The Secret Service has already assigned him the code name ‘Combover.’“

2) (guido) – “Um, no thanks, Donald! One Apprentice in the White House in my lifetime is more than enough for me.“

(john1v6) – “Hey, if you elect me, I’ll have the shortest inauguration speech ever: 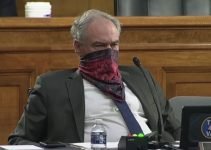