Some years back, I started reading J.K. Rowling’s Harry Potter series.  As fiction goes, the stories were very good, but hardly the best I have ever read.  Comparisons aside, Ms. Rowling is no Lewis, let alone a Tolkien or a Zelazny.  The only reason I bring that up, is because there seem to be a large number of people determined to find a way to prove Harry Potter is real.  That, or they simply don’t have real lives enjoyable enough, to spend their attention there for the most part.

To see what I mean, look at the economics of the Wizarding world for a little bit.  Consider the coinage.  Wizards are still on the Gold Standard, and a strange standard it is.   Harry’s magic wand, for example, is a critical tool for his education and is designed to last a lifetime.  At first the price of seven gold pieces (or 7 Galleons, as they call them) seems reasonable.  But a simple pewter pot for potions costs 10 Galleons, 42% more than a magic wand, even though the wand has rare and exotic materials and is crafted by an expert – in fact, we are assured that Ollivander may be the world’s best wandmaker, yet here he is selling priceless artifacts for less than the bookstore down the street charges for some of their schooltexts.

Let’s also think about the use of gold and silver and copper.  The Galleons, Sickles, and Knuts use gold, silver, and copper, and while that’s very attractive as an image, it falls apart when you work it out.  We find out, for example, that there is an exchange rate between Wizarding money and Muggle (our world) money. I have read that a Galleon works out to about 5 British Pounds or 10 dollars US, and if that were the case I’d be buying up Galleons as fast as I could.  You see, the price of gold varies but even before the current economic crisis it was well above a thousand dollars an ounce.  Since no coin is made with less than a tenth of an ounce of gold, even that tiny amount would make a Galleon worth more than a $100 US, so anyone able to work out even basic math would buy up all the Galleons he or she could.  It’s less extreme, but the content value of the metal in Sickles and Knuts would also be higher than their face value, which is the opposite of how governments coin money.  One reason people stopped spending ten and twenty dollar gold pieces, was because those coins soon became worth more than just ten or twenty dollars.  Using precious metals for coins makes them unfeasible for commercial use, by the nature of inflation and the simple fact that precious metals are rare.

I could go on, to discuss things like the lack of demand curves and employment indices in the Wizarding world, but I think you see my point.    Rowling was telling a story, and did it well indeed, but she was not describing anything real or factual.  And anyone trying to impose such an artificial, contrived world onto our own, will find it simply does not fit.  This is the same problem faced by the more extreme fans of Sherlock Holmes, certain Aliens from movie adventures, and fans of Michael Moore and Al Gore.

Which brings me at last to my point.  Politics is about story-telling and fantasy as much as any novel or movie.  Some few leaders are able to convey the real world into political terms, to help people understand the way things really work and how they can act for their own rights and the nation’s welfare.  But too often it’s the opposite, some political story-teller trying to paint a picture to sell to voters.  And the problem there, is that the voters like the picture but don’t stop to consider how close to reality it may or may not be.  And rather than admit they were unrealistic, the politicians in this case simply move on to the sequel, continuing to sell illusion to people who really should know better.

Like the fable of how punishing rich people for financial success will somehow lead to a better life for everyone else.

Like the myth of needing to outlaw a gas which not only harms no living thing, but is actually vital for life.

Like selling folks on the idea that if we wish really, really hard, we can make energy out of dreams and politics, instead of relying on hard science and practical experience.

Like the lie that killing a child before it’s born is not really killing a human being, and the most innocent of human life.

They’re not evil, those people.  They’ve just forgotten that they are being told a story.  They like the story so much, they’d rather have the story than the truth. 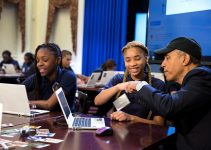