Home
Breaking News
The Ever Changing Meme On The Rep. Gabrielle Giffords Shooting

In the never ending din of new coverage about the shootings in Tuscon yesterday, the punditry and politicians are revealing themselves to be the true villains.

First, and most reflexively, blame was laid at the feet of the Tea Party and Sarah Palin. Shitheel Markos Moulitsas, among others leading that charge are shown to have engaged in the same sort of “dangerous rehtoric” as politicians on the right have in “targeting” an official to be voted out of office.

In fact even President Obama has a dog in that “fight,” as you’ve surely not forgotten this (via HillBuz): Since that wasn’t taking hold, the left-leaning media has seized upon the “vitriol,” as espoused on talk radio and certain TV channels (i.e., Fox News) as the root cause of this unexplained violence. Pima County Sheriff Clarence Dupnik started his press conference detailing the shootings by laying the blame (just hours after the shooting and while they were still looking for a second suspect) at those same media outlets for inciting this violence. Of course he offered no proof, just his own personal conjecture, but the meme seems to be taking hold, for now.

Of course the problem with the meme is that the shooter is apparently defies such simplistic, off the cuff classifications. 22-year-old Jared Lee Loughner is apparently a very disturbed young man. He has no known affiliation to the Tea Party, or Giffords’ opponent in November’s election, and the only known political leanings for the alleged gunman are extreme left-wing.

No one knows what drove him (and his alleged accomplice) to such a horrific act, but if history is any guide you can be pretty sure that memes that get tossed around in the initial aftermath of a tragedy are wrong. The alleged gunman was known to police, and he may have had previous contact with the Congresswoman. I’m most inclined to believe that in this case the old adage, “all politics are local” applies to political violence as well… 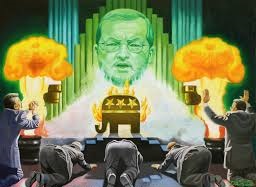