There’s a bit of a dustup between two opinionators at the Washington Post. Jennifer Rubin (a former colleague of mine, but we’ve never actually had any contact whatsoever) brought up the New Black Panther voter-suppression case, and her current colleague Greg Sargent rebutted.

First, some brief background. On Election Day 2008, two NBPP members,
one of whom was carrying a baton, were videotaped outside a polling
station in a mostly black neighborhood in Philadelphia. No voters
complained, but video of the two taken by Republican poll watchers went
viral in the conservative media. Two months later, Bush administration
officials in the Justice Department filed a voter intimidation lawsuit under a section of the Voting Rights Act that was last used to stop a 1992 statewide voter suppression effort against blacks by then-Sen. Jesse Helms (R-N.C.).

Pretty much accurate. so far, so good. But note the use of “Bush administration officials” — that might be technically accurate, but will be used over and over again as a shorthand for “bad.”

Republican congressmen Lamar Smith and Darrell Issa are literally
accusing the Obama administration of favoring “a political ally — the
New Black Panther Party.” Think about that for a second: Republicans are
casually suggesting, with a straight face, that the Obama
administration is “allied” with members of an anti-white hate group.
Never mind that one of the men charged in the 2008 incident, King Samir
Shabazz, once described
Obama as “the next slavemaster” and a “puppet on a string.” The
thinking seems to be that because the attorney general and the president
are black, and black people — or black Democrats — all are filled
with seething hatred for whites and an unquenchable thirst for vengeance
over past wrongs, they must be in alliance. It’s idiotic on its face.

“Ally” is a bit of an overreach here. It implies a certain level of agreement between the two parties, and that would be absurd. If there is one characteristic that defines Obama, it’s a lack of a sense of loyalty. But what would be indisputable would be to describe the NBPP as “supporters” of Obama — that was the entire gist of their shouts and imprecations at the polling station.

Furthermore, the Justice Department did not “dismiss” the case. Rather,
it decided — in the absence of any evidence of a nationwide plot by the
NBPP to intimidate white voters — to narrow the civil charges and
obtain an injunction against the one NBPP member that actually had a
weapon.

I’m no lawyer, so I’m not going to get into a technical argument about what constitutes a “dismissal” of the case. Rather, a simple recitation of facts: the NBBP members were indicted. They chose to ignore the whole matter. They didn’t show up at their trial, didn’t send counsel, did nothing. The judge then ruled against them summarily, convicting them on all charges. At that point, the Justice Department decided to take its victory and throw it away. It asked the judge to drop all charges against one guy (the one without the billy club) and “punish” the other guy with an injunction saying that he couldn’t show up at a polling place with a weapon again — until 2012.

And what’s this BS about there needing to be a “nationwide plot?” When is that some kind of criterion? The cases Sargent cited didn’t involve nationwide plots, either.

Rubin mentions the U.S. Commission on Civil Rights report — without noting that then-President George W. Bush gamed
the system to stack the panel with Republican partisans. The one actual
voting rights expert on the panel, Republican Abigail Thernstrom, has called the entire issue a right-wing effort to “topple” the Obama administration.

So, what were the flaws in that report? What did the Commission get wrong, or slant, or distort, or just lie about? Bush used his legal authority to appoint whom he believed would to the best job, and didn’t stuff it with liberal activists — that’s supposed to be some great scandal?

Rubin also asserts as fact that Deputy Assistant Attorney General Julie
Fernandes “instructed Department attorneys not to pursue cases against
African American defendants,” but the two conservative former Justice
Department attorneys who leveled those charges give completely different accounts
of the incident, with one saying that Fernandes said the Civil Rights
Division was in the business of doing “traditional civil rights work,”
which he interpreted as “helping minorities.” Rubin also neglects to note that the voting section has already intervened on behalf of white voters against a black defendant.

Those two accounts — at least one of them was delivered under oath. That means that if Mr. Coates lied, then he committed perjury. You know, perjury — as in Bill Clinton and Scooter Libby. That’s certainly grounds for more investigation, not less.

She calls the case a “blatant case of voter intimidation,” but no actual
voters have come forward to complain, even after the deluge of
coverage. Let’s face it: If the OPR/IG investigations of the case come
back without evidence of politicization, conservatives won’t drop the
subject — they’ll simply argue that this proves the Obama DoJ is
politicized and they’ll demand further investigations.

Here’s where we see the corrosive danger of paying too much attention to lawyers, wonks, and lawyer-wonks. Here are two men, in military-style fatigues, proclaiming that we were gonna all be ruled by The Black Man, whitey better watch out, and nobody better mess with The Black Man, in front of a polling station on election day, with one of them brandishing a weapon. That is intimidation — and it takes a very special kind of elitist arrogance and stupidity to even try to weasel around that.

While conservatives constantly complain of being unfairly accused of
racism, they’ve spent the better half of the past two years leveling
such frivolous accusations against Obama, in the context of almost every
policy decision he’s ever made, from health-care reform to financial regulation. When you think about it, suggesting that the Justice Department is racist after having argued that Obama is actively ruining the economy to get back at white people for slavery actually kind of seems like small potatoes.

Another dodge. Because other attacks have been partially driven by “improper” motives, then all of them are BS — and so are these.

With the NBPP case, they’ve managed to turn one of the Obama
administration’s most low-key triumphs, the restoration of the Civil
Rights Division to its original role as a protector of all Americans’
civil rights, into an overblown scandal, short on evidence but long on
the kind of race-baiting Republicans have freely indulged in since the
first black president of the United States took office two years ago.
Holder was right, the “the facts and the law,” are on his side, and, as
many reasons liberals have to be disappointed with this administration,
Holder’s stewardship of the Civil Rights Division isn’t one of them.

The NBPP case is a “low key triumph?” In what universe? Two guys stood in front of a poll, one of them armed, and loudly proclaimed that their guy better win, and the sole penalty is one of ’em can’t bring a weapon to the polls until the next presidential election — when their guy will, in all likelihood, be up for re-election?  One of the two, also, apparently an official poll watcher for the Democratic Party?

Those of a malicious bent should take very careful note of the Justice Department’s actions and statements on this case, and assemble a plan on how to act at polling stations for 2012. Don’t bring any really big weapons, don’t explicitly threaten violence, and don’t conspire on a national basis. Just keep it local, keep it “low key,” keep it implicit, and you’ll be fine. Billy clubs, axe handles, baseball bats — nothing more than that. Paramilitary garb is OK, but no armor or masks.

That’s the rule they’ve established. Those who should choose to adopt them should have no fears of prosecution, as long as they follow the rules.

"Nothing but a politically correct inspired witch hunt"
Torn 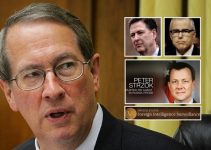