Liberals hate war, and they apply that hate to almost all war conditions. Conservatives also hate war, but are generally willing to go to war if the reason is morally compelling. This is an essential and irreconcilable difference between liberals and conservatives on war. To understand the matter more objectively, it is important to understand the limits of what each category of power faces.

We teach our children to obey the law, and to respect its creation and enforcement. We understand that law is the skeleton of civilization, and accountability under law is the first formula for any democratic republic. It is for law that constitutions are written, and under law that trust in any contract exists. Law is the foundation of cities, and of nations. But there is a limit to any law.

War is death and destruction, on a scale so terrible that many generations have come upon it naively, imagining it can be managed and controlled, and so wars have been started by fools and madmen who scarcely imagined the horrors they have unleashed. No man who has ever stood in battle is eager to face the next one. Yet even weary veterans have chosen war, not out of foolish pride or blindness to the cost, but because it had to be done. Strange that it continues to happen, but many people refuse to see evil for what it is, to understand that there are terrible things which must be stopped, but for which the law is powerless. War is terrible, but necessary.

Betrand Russell observed that the“chief gain derived from the law and the police is the abolition of private wars, and this gain is independent of the question whether the law as it stands is the best possible. It is therefore in the public interest that the man who goes against the law should be considered in the wrong, not because of the excellence of the law, but because of the importance of avoiding the resort to force as between individuals within the State.”

Russell never acknowledged the primary implication of this point, that if and when a moral imperative cannot be accomplished by law, it must default to the rule of war. Whether or not we think a war is morally right, we must recognize that in many situations it is inevitable.

Which brings me to 9/11. The atrocities committed on 9/11 are indisputably heinous to all reasonable people, especially since they were planned and committed against people known to be innocent of any offense or provocation. The 9/11 attacks were pure terrorism, evil by any sane definition. And far beyond the scope of law enforcement. While terrorist acts are criminal by statute, they also create a strong imperative for war. The 1914 assassination of a single individual in Sarajevo was the spark for the first World War; so much more does the mass murder of thousands of innocent men, women, and children, targeted precisely because they were innocent, create a moral imperative for a response of outrage and deadly force. This fact in no way justifies indiscriminate use of force, nor does it claim that wars are wise by definition, simply because they are sometimes inevitable. Going back to law enforcement, it’s like a police officer confronted with an armed man and a threat to innocents – he does not want to have to shoot, but he carries the gun for a reason, and as terrible as it may be for a police officer to shoot to kill, if the choice is the criminal or innocent people, he must not flinch at his duty to use deadly force. In the situation caused by the terrorists on 9/11, the threat to innocent life is undeniable, and the evil of the monsters beyond question – what remains is how to carry out the duty.

Some people have criticized the war in Iraq and Afghanistan, saying they see no link to 9/11. They are blind, wrong, or lying. The condition of terrorism in the Middle East is worse than pervasive; it has become a chronic condition which infects almost every government in the region, either through attacks or through insidious corrosion of the nation’s moral fiber. Therefore, it was not only right but critically necessary for President Bush to demand the officials in the region choose between supporting terrorists or weeding them out. It was self-damning, that the governments of Iran and Iraq chose terror over democracy, and that the Taliban continued to hold Afghanistan hostage. They choose poorly, and it is too late now for them to pretend that they did not understand the choice. This is not to say that the people of those nations made this choice, but seeing the abomination of Al Qaeda, the likes of Mahmoud Ahmadinejad and Saddam Hussein made their choice and there’s no denying it.

The Taliban controlled Afghanistan when the U.S. responded to 9/11, and they harbored bin Laden and many Al Qaeda agents. The invasion of Afghanistan is therefore as legitimate a war as any human enterprise can be. So naturally the Left focused their complaint on the war in Iraq.

The war in Iraq may be understood by simply recognizing the following; that Saddam Hussein brutally terrorized the majority of his citizens, with terror and rape squads and prisons for dissidents to rival anything created by the Nazis, that his regime developed Chemical and Biological weapons and was farther along in developing Nuclear weapons than was expected by 1991, that his regime obliterated the town of Halabja and killed thousands of innocent people for the crime of being Kurds, that his regime started wars with Iran and Kuwait, and threatened war with most other nations in the region, that his regime sponsored and protected a wide range of terrorists, including Abu Nidal and Carlos the Jackal, and an Iraqi agent was a key player in the 1993 World trade center bombing. It is also vital to understand that the 2003 invasion of Iraq did not start a war, but was a continuation of the First Gulf War, where hostilities were ended contingent on Iraq’s compliance with the cease-fire terms managed and controlled by the United States. Iraq not only abrogated those terms, but lied to inspectors, moved and hid material, destroyed documents, fired on U.S. and coalition aircraft, attempted to assassinate President George H.W. Bush after he left office during a visit in Kuwait, and demonstrated every intention of renewing aggression and terror tactics as soon as it could do so. If ignored, the Hussein regime in Iraq represented a threat to the safety and stability of every nation in the region, it had repeatedly broken the terms of its cease-fire, committed acts historically recognized as cassae belli, and boasted of both present and future possession and possible distribution of WMD. In the months following the 9/11 attacks, only an insane leader would have ignored the threat or failed to act. President Bush took the necessary and requisite course of action.

Regardless of whether one approves of the war or not, the fact exists that we are engaged in one, and it matters a great deal how we conduct it. The enemy is not placated by speeches or gestures of understanding – they are callow and craven, and will cling to the notion that they are in control, until by force – and only by force – will they come to know the disaster they crafted in arrogance. The war in Iraq began when Saddam Hussein invaded Kuwait in 1990, and the war in Afghanistan began when the Taliban decided as a matter of policy to kill innocent Americans. That they made assumptions which have proven false, does not oblige us to stay our use of force – the war will continue to its resolution, and our sole choice is to do what is required to win, or to submit to evil in the hope that a future generation will be brave enough to do what we would not. This is one reason it is so important to teach our children history, so they understand that while the passing of time may increase the cost and weaken resolve, the rule of war includes the unyielding requirement of consummation – no matter what it may seem, evil must die out at the hand of good, and force is often required for this purpose. Some of God’s angels carry swords, and those who choose to make war against America invite their own destruction. Despite the cowardice of the current Administration, America will come back to finish the job. It’s the rule of War. 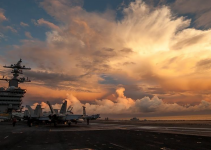