The rally was billed as “Illegal means Illegal” in support of Arizona”s new anti-illegal immigrant law, SB 1070, due to go into effect later this month. The rally was organized by UMKC law professor and now a candidate for Kansas Sect”y of State, Kris Kobach. He was instrumental in drafting the legal language for SB 1070.

Maricopa County Sheriff Joe Arpaio was the guest speaker at last night”s rally and did a terrific job detailing the horrid plight of drugs; human trafficing; violence on our southern border; what can be done to stop it; and the Obama administration pathetic response to Arizona”s actions to protect its citizens.

Mrs. Locomotivebreath – that curvaceous raven-haired beauty whom I”d marry all over again – and I attended the event inside the banquet hall, along with about 2500 other concerned citizens. Needless to say it was very crowded and warm inside, but well worth it. Thank you all who put on deodorant that morning.

I guess-timate about 200 or 300 misguided pro-illegal and ignorant open border folks stood on the sidewalk outside with their signs (see pics below), under the watchful eye of the Overland Park Police. The protesters were generally were quiet and well-behaved – except for that suitcase bomb thing.

“The Ritz Charles banquet hall, where a Kris Kobach campaign event was held Tuesday night, was cleared after a suspicious briefcase was found inside the rally.

Overland Park Police Chief John Douglass said the briefcase was locked and no one at the event claimed it. As a result, the Police Department”s bomb unit and the FBI were called to the Ritz Charles

It was determined to be suspicious,” he said. “It was not a bomb.”

Douglass said he would not apologize for his department”s handling of the suspicious briefcase.

The event attracted an overflow crowd. Those at the event were notified about the briefcase when it was first discovered before 8 p.m. and given the option to leave. Most stayed.

Practically every last one stayed, from what I could see, shouting USA! USA! USA! as Sheriff Joe took the stage.

Mrs. Locomotivebreath and myself stayed till 9 PM. We saw no “chaos.” We heard no orders to “evacuate.” We orderly and leisurely exited along with thousands of others out into the parking lot. I saw only one protester left standing on the sidewalk holding a sign by that time. The others had dispersed. So, imagine our dismay as we watched the nightly TV news and two talking heads started to bandy about words like “chaos” & “evacuation” which made it sound as if a national emergency had been declared.

Must be sweeps week.

I took all best online casino these pictures last night with the permission of everyone I photographed. No one objected and only one man questioned if this was personal or professional. I replied “personal.”

*Perturbed protesters all in a row

*Compare and contrast these two news wagons. (hint: one is all in Spanish & the other is all in English)

*I simply can”t fathom this kind of bigotry and ignorance.

*Agreed. Jim Crow SUCKS, but what does the morally repugnant brutality to deny American citizens their hard won civil rights have to do with denying illegal immigrants entry into this country?


And white supremicist? Again, I cannot fathom this type of bigotry and ignorance. I blame gub”mint schools.

*I think this guy down below needs to re-read his Bible. There”s a teeny bit of difference between Eternal Salvation from a Holy God who forgives those who sincerely repent, and temporal amnesty from execrable mankind which simply won”t prosecute unrepentant criminals. 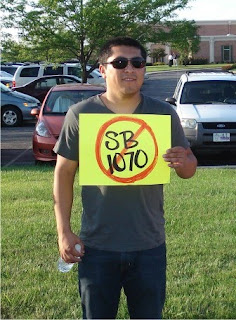 The facts are inside the rally. Will you listen? And I agree. Love your neighbor. Including your fellow citizens in Arizona who are on the front lines of the invasion from the Mexico.

*Kobach at the podium.
We”re all Arizonians, now.

*NoBama Truck. Rising from the trailer hitch was a 24 ft. pole with Gadsden flag hoisted high.

I can see November from my house.
(thanx rick)

"Do you like him any better now? No?? Then you're not a racist."
Car bomb in New Jersey?